She is now Berry Arrived!

We took Katy to her new home at Berry College in Rome, Georgia, today. When I woke her up this morning I asked “do you know what day it is?” She told me I woke up before her alarm went off. I said “It’s the first day of the rest of your life!”. If looks could kill.

Katy has her own car so the plan was she would drive and we would follow her. She drives slower and would have a hard time keeping up with us. That meant I got to watch my teenage daughter drive on I-285, the most dangerous highway in the entire country. Or in the Top Ten anyway. We actually had problems less than two miles from home when her GPS quit working and she pulled over into the Ace Hardware parking lot. Well, we got that straightened out and hit the road again. Katy pulled out of the parking lot so fast she left us behind and we nearly lost her before we got out of town. She got off one exit too early — something she had almost done when she and Heath took a practice drive on the highway a few weeks ago. Nothing is in a grid here, so there’s no making the block and coming back. We took a 10 minute detour and got on the highway we were supposed to be on. And eventually Heath realized Katy wasn’t going the way we had planned. She was just following the GPS and she thinks when she took the wrong exit it switched her to a different route. However, all roads lead to Rome (see what I did there?) and we made it just fine. My nerves weren’t completely frayed, maybe about 90%. Move-in is staggered this year and we got to Rome about an hour before our check-in time. We re-grouped at the parking lot of a restaurant near campus so we could head to Berry together and not get separated in the line. We ended up going to a nearby CVS for a restroom break (me, anyway) and a bottle of water and snack. We hung out there for a little while and then headed over to Berry a little early.

And here are going through the

It’s a gated school so visitors have to go through the  main gate and their ID checked. Nothing new there. But we got our temperatures checked, too. What I didn’t get a photo of was the two big signs saying “Campus is closed. Faculty, staff and students, only”. The campus is very popular with the community for bird watching, biking and running, photography (particularly events) and in general just enjoying the outdoors. Our first trip there we ran into what looked like a home school group having an art class by the old mill.

Katy just got her temperature taken and we are next. They had people working both sides of the cars. The red brick building on the right is the welcome center where you usually go through but they had this set up.

After that it was onto the Cage Center (gym). Students went in and parents waited in the car. Although one set of parents did wander out and go look at the eagles as we were right in front of them. They aren’t in the nest right now and Heath checked the webcam and it’s a recording. So that took about 20 minutes. One of Katy’s best friends from high school is also going to Berry and her check-in time was the same time. Well, Emma’s parents dropped her off at the front of the Cage Center just as Katy was walking up so they went through about half the stations together. They said they would check everyone’s laptop to make sure it worked with their system so Katy took hers in. Since she’s been able to access her email all summer they actually didn’t check hers. She picked up her room key, stickers for the car, registered her bike and got her little health kit (paper masks, thermometer and hand sanitizer). I asked if she got a key for her mailbox. She said they are having students pick up mail at the post office window. Berry is small enough that all the mail boxes are in the student center and you keep the same box the whole four years. My college operated the same and back when you got everything in the mail (letters, bills, magazines), it was really convenient. I guess it’s easier to have students line up six feet apart to pick up their mail at the window than to have a bunch of students shoulder-to-shoulder at the boxes. They get an email whenever they get mail or a package so no need to check your mailbox 10 times a day like we did in school.

So she got back in her car and off to the dorm. And she got lost. We drove past the challenge courses and up to the “83 original acres” and the original school building (now houses human resources) where Katy pulled into the parking lot and checked Google maps to see where she went wrong. She just drove past the turnoff. We finally got there and found parking places in separate parking lots at first.

Katy’s bike was in the back of the Highlander so Heath rode it down to the dorm to lock it up in the racks. That dorm has three bike racks that I saw and they were filling up. Even if you don’t ride to class there’s lots of places to ride just for fun. Although some parents say their kids never ride their bikes. We’ll see what Katy does.

We loaded up the little utility wagon and headed up to the room. We knew the rooms in this dorm were on the small side but this was smaller than I expected. The depth was about right but the width was a lot smaller than any double room I ever had. Katy’s roommate had a mid-morning check-in time and her parents left maybe 20 minutes before we got there. She was completely unpacked, photos and towels hanging up and everything.

The furniture is the type that’s self-lofting. Well, this stuff wasn’t lofted so much as stacked. The bottom of the bed is exactly five feet off the ground and I know this because when I stood under it there was about a quarter inch between the top of my head and  the bed. I still managed to bump my head. Katy’s roommate, Megan, (very nice girl) said she and her parents asked someone (I don’t know who) about it and were told to just leave it.

This is what they are supposed to look like (screenshot from a 360 video tour):

Not only is the bed higher but  you can spread the desk and dresser out a little bit so you have a little more floor space under the bed. I don’t think it’s going to be long before they get tired of bumping their heads and feeling like hobbits and get maintenance to help with the beds.

So we helped Katy unpack and get a little organized. We didn’t get her totally set up. For all the stuff we hauled up there she still needs a few more organizing items for the closet. And some things I knew she’d need to wait on. The closets don’t have doors so the girls, at least, put up curtains with a tension rod but not having any idea the dimensions of the closet I told her to wait until she got there. Megan had hers already, I know some parents were asking around about dimensions, but I still figured it could wait. Under normal circumstance we’d have spent a couple of days and we could have gone to Wal_Mart and gotten something. And she’s going to need some kind of a cart with shelves for the closet. She had way too many loose things. Even with all the Sterilite bins I bought. Once again, that would have been a “when we get there” Wal-Mart run. Well, Katy is resourceful, she can figure this all out.

Katy has very few hanging clothes. And we didn’t quite get that last blue bag unpacked. She’s going to need to organize her closet a little better.

This is another angle. There’s a little storage alcove right next to it.

Directly across is the other closet and a sink in the corner. I never thought a sink in a dorm room was a selling feature, after all, I never had one and managed to survive. But now I’m really glad she has one. She can brush her teeth in the bedroom and it’s less time spent in the community bath. They had a sign on the bathroom door saying only six people at a time. And her room is directly across the hall from the bathroom so less time walking in the hall. It’s a shame to go to college and have to avoid people!

Katy making up her bed. She could have taken her mask off at this point but you kind of get used to having it on. 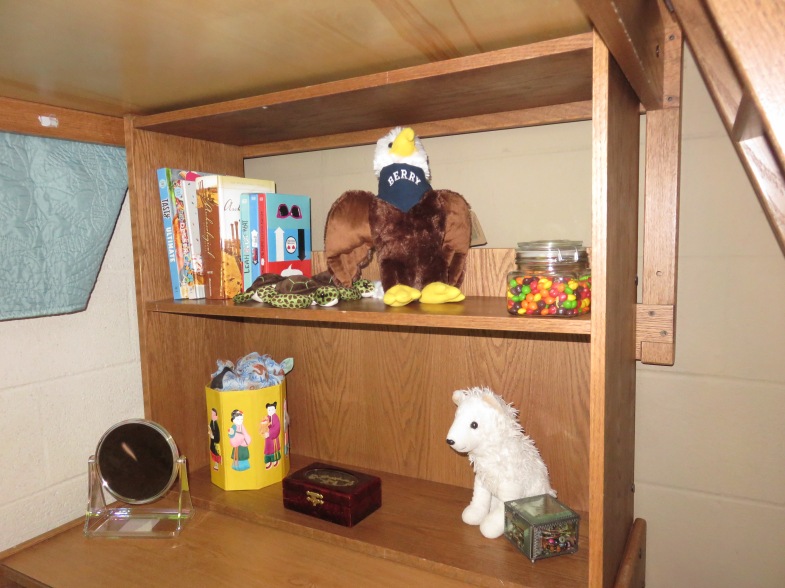 Did get her dresser a little set up. She has her Berry eagle. The school mascot is the Vikings but they have that nest with the bald eagles and have made the most of that. Plus they have seven deer for every student so there is lots of deer stuff, too. The white animal is an arctic fox. It was the Girl Scout cookie incentive when Katy was in fourth grade and has been pretty much every where with her since then.

View from the end of the room. 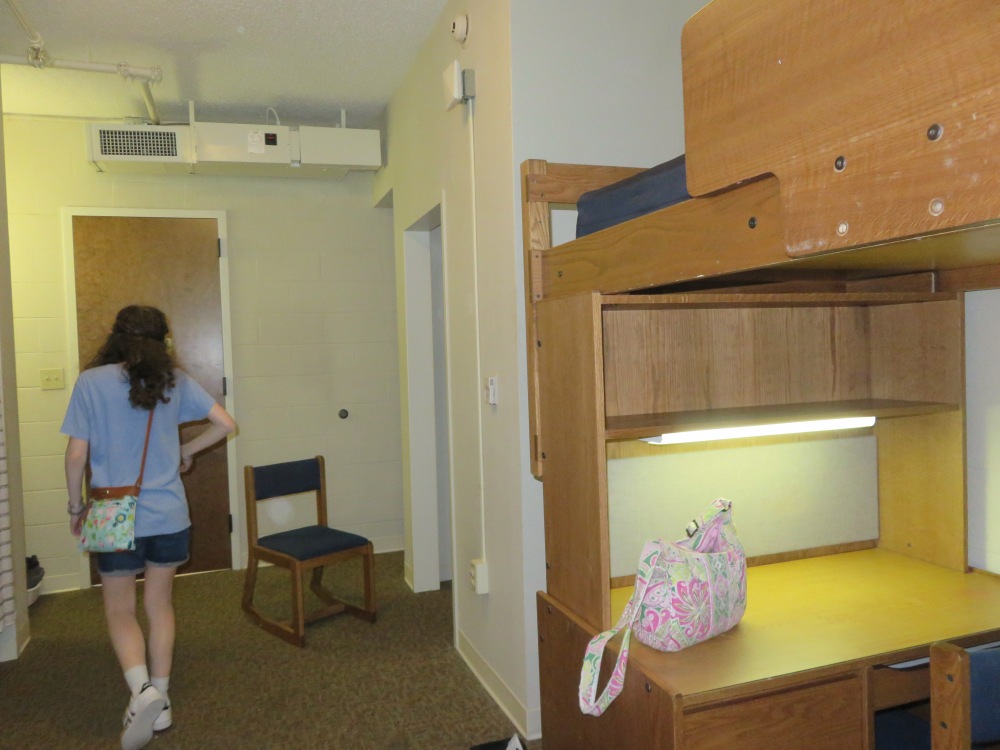 There’s more space between the desk and wall than it looks like. The mini fridge is back there. Megan has a lot of space between her bed area and closet because there is some kind of utility stuff on Katy’s side so that extended the wall. Katy’s bed is in a good spot, though. There are electrical outlets right at bed level so she can plug in her clip-on lamp. The other side of the room doesn’t have that. And I wish I’d known the desks had built-in lamps or I wouldn’t have bought a desk lamp. I offered to bring it back but she decided to keep it. 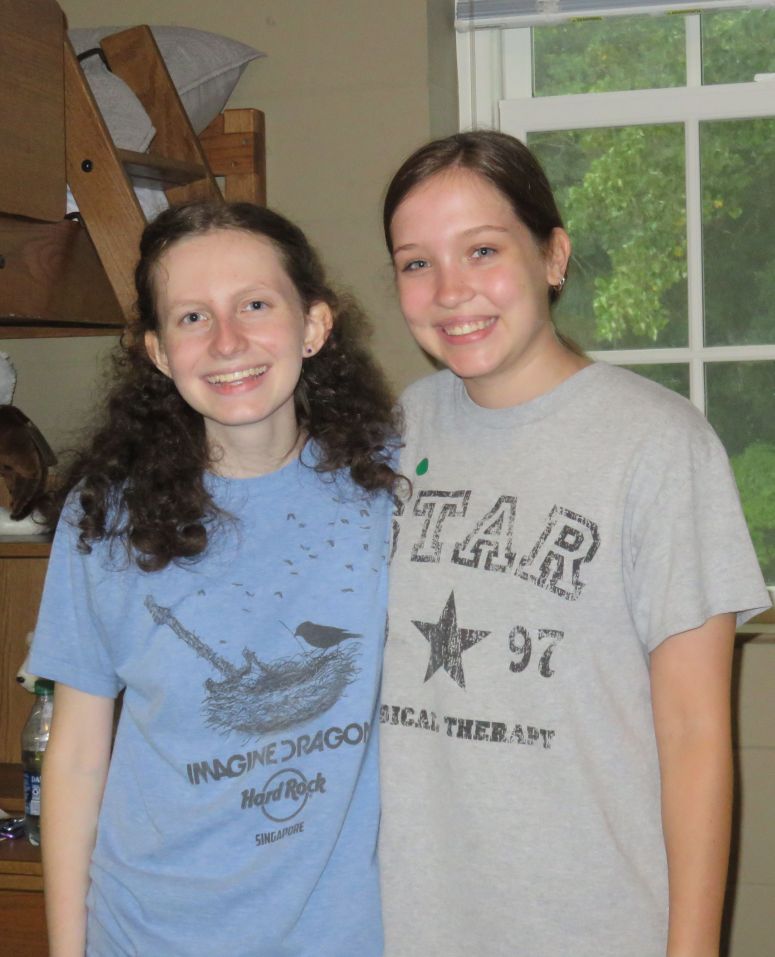 Katy and Megan. I told Katy to give me her phone and I would take a picture of them, she could text it to Megan and Megan could send it to her mom. Megan said that was good because her mom wanted a picture of the two of them.

And it started to rain so they had to turn around and watch the rain. There was no rain in the forecast but this is the south in the summer so we got a pop-up thunderstorm. The electricity even went out for a few seconds. I’m just glad we were moved in before it started raining. It was really pouring.

We didn’t see many people. Katy had turned in three choices for dorms and this one wasn’t on her list. It’s mainly upperclassmen and they put freshmen into the rooms that hadn’t been claimed by returning students. There are only six freshman on Katy’s floor and with staggered move-in over two days it wasn’t going to be crowded. The dorms that have more freshmen probably had a little more activity. This dorm is known for its small rooms but it’s a pretty popular dorm from what Katy said.

Move-in was so rushed. Heath said it was more like dropping her off at camp and it really was.  I just have to remind myself we won’t be picking her up in two weeks.

3 thoughts on “No longer Berry Bound”