The “plastic wrap ball game” does not promote good manners.

Katy’s “group chat” friends usually go to a movie the last day of the semester as there’s a theater right across the street from school. Well, with the exemption policy only one of the girls actually had to take a final today so no one else was going to school. They wanted to have their gift exchange at sometime and Katy thought they might just do it in the school library one morning before school started. I thought that sounded boring and told her they could come to our house the last day of school and I would make some lunch. Last year they did it at our house the day after Christmas and I just had a few snacks for them.

I thought I’ll just put out sandwich stuff and it’ll be easy. Nothing is ever easy. 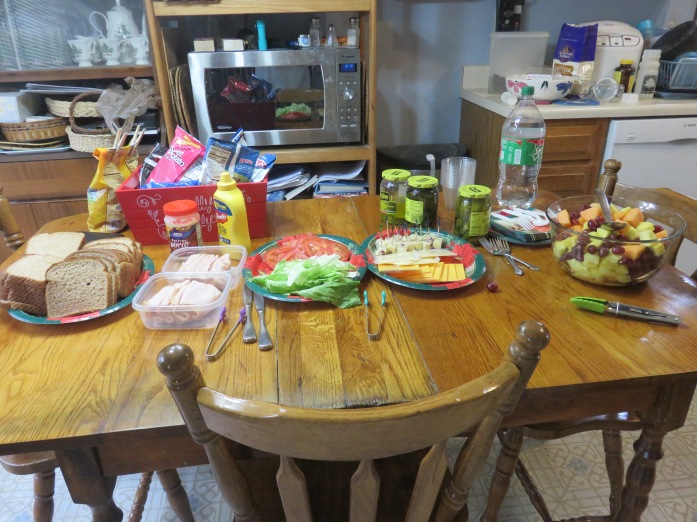 We ended up with quite a spread and there was dessert afterward.

And snacks in between. 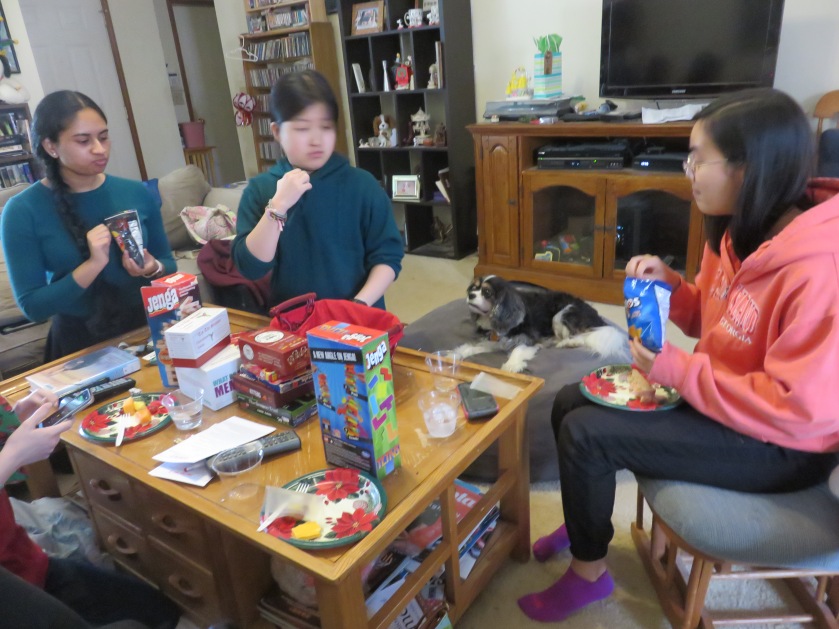 Buddy positioned himself where he could keep an eye on everyone’s plates. And Katy had the games piled up and ready to go.

I had asked Katy last week if she wanted me to put together a “plastic wrap ball” game and she enthusiastically said “yes!”. If you aren’t familiar with this, you take a somewhat nice prize, a bunch of little things and then several miles of plastic wrap. You take the nice prize and start wrapping it in plastic wrap. Then you put a small prize in, wrap a few more layers, put in another prize, wrap a few more layers and so on until you have a bunch of prizes buried in plastic wrap. Everyone sits in a circle. One person starts peeling plastic wrap while the person to the right rolls two dice. When the dice land on doubles the person unwrapping has to stop and the ball and dice each pass to the next person. It’s a little like “pass the parcel” except you have dice instead of music. Whatever prize falls out while you are unwrapping is yours to keep.

So I needed to buy a bunch of a little things to go in it. I figured I’d go to the Dollar Store but while I was standing in line at Kroger I saw a bag of 20 little bags with various prizes — stickers, bubbles, pens, notepads, little flying discs with shooters, basic grab-bag junk. It was cheap so I bought it.

Every time doubles were rolled the next person would yell “doubles, give me!”. It was all very fast-paced and exciting. And not at all mannerly.

The big prize was a Squishmallow. I think they are so cute.

Poor Harshita didn’t get a single prize. However, I hadn’t put all those little prize packets in the ball so I got the leftovers from the closet and gave them to her and Jenna shared one of hers. I think Ivy ended up with the most.

And I was amazed at how well those junky little prizes went over. Each little packet had three toys and Katy got what she called the “weapons” packet. Some type of little shooter things. They had fun with the paddle balls and jumping frogs. Jenna and Harshita went through a couple of bottles of bubbles (they were small) while Ivy swatted the bubbles away.

Harshita blowing bubbles and Ivy swatting them away while everyone else plays Skip-Bo.

So this was actually a gift exchange. They use an online thing called Elfster. Everyone in the exchange puts in their name and creates a wish list.  The program assigns the names so no one has any idea who has whom and you can set it so certain people can’t get each other. Katy always sets it up so Catherine and Elizabeth (twins) can’t get each other and each person can’t get their own name, either. So they wanted to keep it a total secret and guess who gave each gift. This took some doing. Katy put a bag of Kroger bags on the doorknob and as each girl arrived she put her gift in a bag and tied it up and they all went in Katy’s room to be brought out later.

Then they had a whole process for opening. They alternated playing a game and then two people opening a gift. So many games were played. Katy had gotten out the Skip-Bo game and wanted me to show them how to play it. Once they got the hang of it, they played all the way to sixth place. They also knocked over a Jenga Tetris tower, exploded some kittens, did some things that are not parent approved and hollered Uno.

They all got very nice gifts.  I told Jenna I’m coming to her house, she got a game that sounds really fun and an R2-D2 kit. Back row is Katy,  Elizabeth, Ivy and Jenna. In front is Catherine and Harshita. Buddy had taken advantage of the distraction to get into the discarded wrapping paper so we decided to put him in the picture to keep him out of trouble. He’s being held against his will.

Katy is in so many gift exchanges this month she got creative and made things. She got Ivy;s name and made the stuffed fox Ivy is holding in the other photo. She also pulled out her Rainbow Loom and made a keychain of Ivy. It wouldn’t be still so it’s a little out of focus but it was cute.

Ivy was the first to go as she had a viola lesson. The rest of the girls decided to pull out the Plug and Play Tetris. They were going to play Wheel of Fortune but it needed batteries.

Harshita didn’t get any prizes from the plastic wrap ball and she finished fifth in Skip Bo but she nailed Tetris.

Almost five hours later the last of the girls left. It was a fun afternoon. Next year they’ll all be off to college.