Katy wanted to make another trip to Berry College near Rome before making her final decision. I wasn’t sure when we were going to do this, then I looked at their calendar and realized they have classes Monday and Tuesday of Thanksgiving week. Our school district is off the whole week so that was going to work perfect. She signed up for a college visit and indicated that she would like to spend the night and attend a class. We did the visit last spring but it’s been a while and she didn’t do the overnight and class at that time. So Sunday we dropped the dog at day care and headed out. Not all roads lead to Rome around here but some of them do and we found one.

Getting the overnight set up took some doing. They usually only do them Monday-Thursday night but I asked if she could do it Sunday night as she had to be at her internship Tuesday morning. So the admissions officer organizing the event found Katy a dorm host and sent an itinerary. Then she emailed again to say that host had something come up but no fears, they found another one and we got an updated itinerary. Then Katy got another email saying they have several prospective students staying over Sunday night and they were trying to pair them up with hosts with similar interests. So she had a third host. I don’t think we got any details on her first one other than her name, the second was a senior economics major, the third was a sophomore animal sciences major.

So we got to the campus and the itinerary said to meet the host at the student center so we did that. Katy’s host was named Edwinae (named after her father Edwin) and she was the sweetest thing. I had made some cookies for Katy to take to her and she said “I think I’m going to cry”. There was no one there from admissions, which I thought was kind strange but we just figured “oh, well”, said goodbye and head out. Found out later that the very first email said to check in at admissions, which is no where near the student center. None of the consecutive emails or itineraries mentioned that.

Our hotel was really neat. It’s a Wyndham but it’s an old, converted warehouse and is right on the main street downtown. Our room was huge and really neat with the brick, I had to get some pictures.

Behind me was a really nice little kitchen area.

We were on the second floor and this was right outside our door.

Enough about the hotel. We needed a place for dinner and asked the front-desk clerk for some recommendations. She said most local places are closed on Sunday but all the major chains are open. Rome is small enough and traditional Southern enough that most things shut down on Sunday. Atlanta used to be that way but so many people have moved in from pretty much everywhere that Sunday is generally business as usual. She did recommend two Mexican places and a Thai place. We ended up at the Mexican restaurant next door to the hotel. It was neat, too. It’s an old bank building and our waiter pointed out the office behind the bar and said it’s the safe. It had pillars that we thought looked a little bank-like. So after dinner I suggested we walk down Broad Street, the main downtown drag. Heath pointed out most places would be closed but I said it was either that or go back to the room and watch TV. With my apologies to The Drifters, “They say the neon lights are bright on Broad Street, they say there’s always magic in the air on Broad Street”. It was really pretty all lit up. 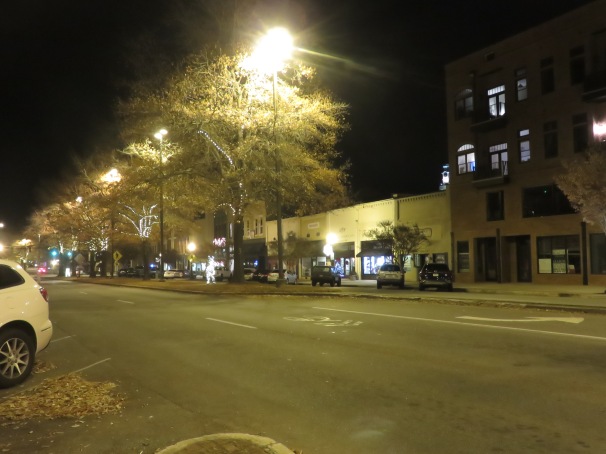 The top of the clock tower (used to be a water tower) a street over.

For a Sunday night in a town where most things are closed on Sundays, it was pretty busy. We went into a cute little ice cream and candy shop that was busy, people were out of the patios of a couple of restaurants and some people were out strolling, with and without dogs. There was a neat-looking bookstore, some gift shops and a huge wig shop Heath was really impressed with. It looked like it was four blocks before you hit the river. We went down two blocks, crossed the street and walked back down the other side and ran across these two bricks. Back in the late 1800s a young man from Rome attended University of Georgia and played football. He was injured and later died. The state lawmakers voted to ban football but his mother said no and they listened to her and the governor vetoed the bill.

So that was a little bit of Rome and Georgia football history.

While we were “downtown where all the lights are bright”, Katy was experiencing the wildlife at Berry.  One of the things Berry is known for is deer. The school is on 27,000 acres (the student body is 2000) and a whole lot of it is woods, fields and a mountain. Deer are everywhere, not that Heath and I have ever seen any. Katy saw plenty by the dorm in the evening, though. 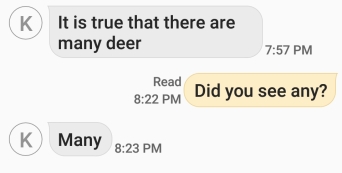 She got a photo of Edwinae and a deer. I thought the deer looked short and fat, Katy says it’s just downhill from where she was. 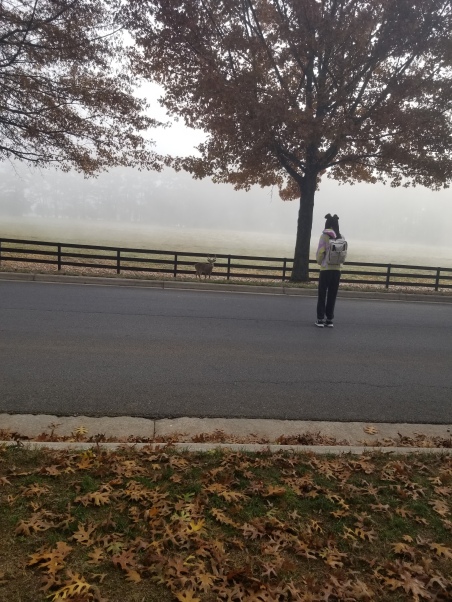 So that was Sunday night.

Katy’s schedule on Monday consisted of the information session, a campus tour, a meeting with her admissions officer (Trevor), class and lunch. Heath and I decided not to do the information session and tour, we did it last February and I got the idea that Katy really wanted to do this by herself. She said later she was the only prospective student without a parent but she was probably also the only repeat visitor. After the tour we met her at the admissions office with the meeting with Trevor who looked like one of the students.

This was really interesting. Berry won’t be sending out acceptances until sometime next week butTrevor had done his homework on Katy. We were asking about financial aid (we don’t have to submit the CSS, the private school version of the FAFSA and is supposed to be way worse to fill out) and he said based on Katy’s profile she will probably qualify for the high end of their merit scholarship. He said “when you get your acceptance letter it will have the offer”. Did you catch that? “When you get”. I asked about the honors program and he said she would probably qualify for that, too, but it is a separate application. He said that invitation should come shortly after the acceptance. So hopefully we’ll hear something by the end of next week. It was a really positive meeting.

The science building, where Katy’s class was, is a little bit of a hike from the admissions office so we drove Katy over there. Her class was principles of botany, microbiology and ecology. She said later they talked about the food web — “like the food chain but the whole ecosystem”. Edwinae was in the class and afterward they walked over to the dorm so Katy could pick up her stuff.

While she was in class we drove around a little bit and ended up at the original school. We read up on the history of the school  — mainly trying to figure out where Martha Berry got her money from and how she managed to convince people like Henry Ford and Andrew Carnegie to donate so much money. So we found out when it started as a boys’ school in 1902 it had one building on 83 acres. We drove past a sign that said “The Original 83 Acres” and there was a building that looked like the historic picture I found online. It’s the original building, it’s still standing and is the human resources office. 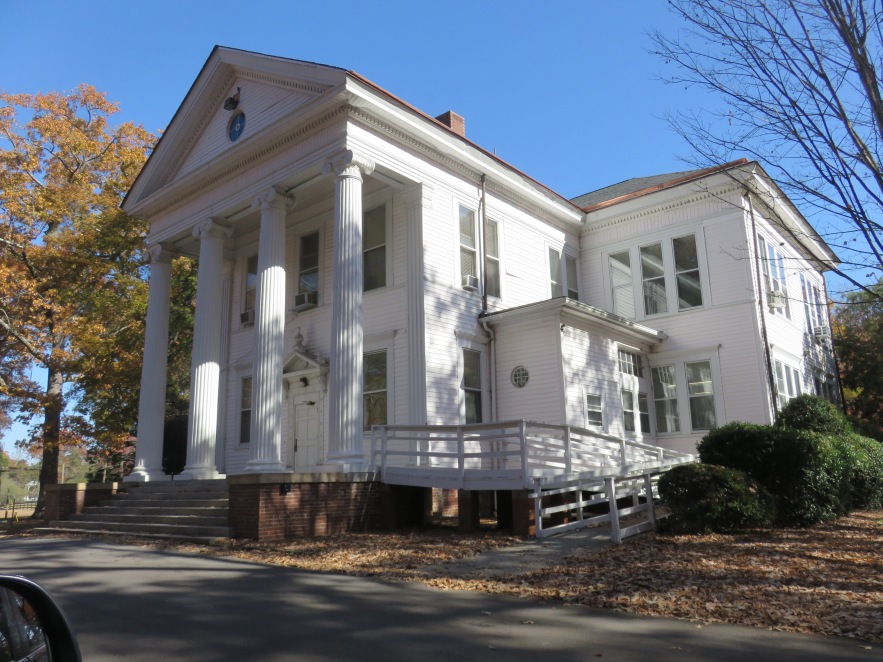 I think it’s gotten a new coat of paint since then.

Another thing Berry is known for is their pair of eagles. The school was going to (and did) build a football stadium and they discovered a nest with these two bald eagles near the site. They are protected by federal law and there are regulations about how close to their nests you can build. The football stadium would be far enough away to meet the law but Berry decided to give them a little more room and scooted the stadium over. They have lots of land and didn’t have to worry about bumping into another building. There are cameras near the nest and you can follow the eagles online (https://www.berry.edu/eaglecam/) and they’ve also set up a nice viewing area with a telescope. Heath is a big fan of the Berry eagles so he wanted to go look at them and was prepared with his own assortment of binoculars. We went for about 30 minutes while Katy was on the tour then we went back while she was in class.

We weren’t there by ourselves. It turns out there is a group of photographers who go down and sit and watch the eagles and take pictures. We visited with a woman who has two books of her photos of the eagles in the school bookstore. Heath has seen of her photos on the Berry Facebook page and was pretty excited to meet and talk to her. She was there both times we stopped by. 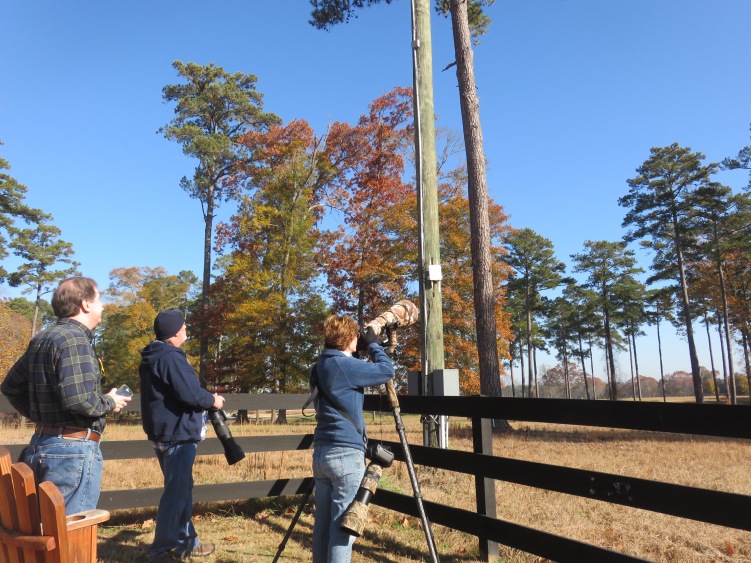 Check out those lenses! She has two 600 mm lenses. The guy standing there we didn’t talk to as much and he wasn’t there when we came back later.

Well, I don’t have a fancy camera but it does have a pretty impressive optic zoom for what it is and I got this.

You can see two white heads poking up.

Just for reference I took this photo last February and the nest is circled. 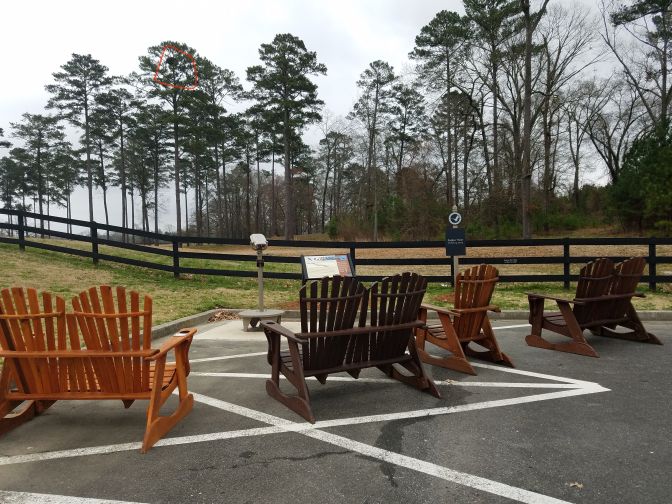 After Katy’s class we picked her up at the dorm and went to the cafeteria for lunch. Katy said this cafeteria is “more straightforward” than the ones at the other schools we’ve been to. It was toward the end of lunch so it wasn’t very crowded. Berry is a small school with 2000 students and it’s a residential school, if you are under age 25 you have to live on campus unless your home is within 40 miles or you’re married or have dependents. Also, when the school started as just a boys’ school it was for economically disadvantaged boys who earned their way working at the school, they built some of the buildings that are still in use. That tradition continues with a student work program that involves wide variety of jobs. You can be a lab assistant, work in the elementary school on the campus, sew costumes for the theater department, milk the cows. So with nearly all of the students living and working on campus it has a real community aspect to it and a community and place to belong is something that Katy wants in a college. She was really happy with her visit. So we’ll hopefully get that all-important email next week and Katy will be a good place to make a decision about where she wants to go.