The other thing I thought would be fun to do was the beach on Mustang Island so we did that on Thursday. It’s about a two-hour drive and a five-minute ferry ride from Victoria. I told Heath and Katy how back in the ’70s and ’80s the ferry line would be two or more hours long and college students would get up close, sell their space to people farther back in line, get close again, sell their space again, and earn enough money for a weekend at the beach. Other people were more than happy to spend a little money to save an hour and a half or two in line. I don’t think anyone does that anymore. I remember people going from car to car visiting, especially if you had a big group in several vehicles. This day they had six ferries running and we were on in about 10 minutes. It was also the middle of the week.

It’s another nice drive. More ranches and cows but palm trees, too. Also lots of water and a big bridge that was down to one lane, alternating directions, due to construction. That was interesting.

You drive through Rockport-Fulton to catch the ferry.

I tried getting a picture of the sign and was about a second too late.

Rockport is where Hurricane Harvey made landfall two years ago. Everyone thought it would be 10 years before the town came back but they’ve made a really quick recovery. We saw lots of topped trees and lots of new roofs.

Waiting in line for the ferry was interesting. We had seen some wind turbine blades going down the street on flat-bed trailers and then saw a whole ship full of them. We also saw some oil platforms. Daddy said there are a lot of out-of-service rigs and he knows lots of people who have been laid off. They’re pretty cool to look at.

We saw Katy’s favorite ferry. She saw this a few years ago and thought it was funny. It was out of service so we didn’t get to ride it.

We finally made it across. We had some lunch and then went to my favorite souvenir shop.

We were in line to check out when Katy saw a sign for live hermit crabs and had to go see them. We did not bring one home.

All dressed up and no where to go.

This shop has a big shark in front and everyone always gets their picture taken in the shark’s mouth. it had two walls knocked out by Harvey, but the shark survived. You can walk through it to get in and out of the store. Heath and Katy left the store that way. I knew neither one was going to pose for a photo and being summer and busy there was a line, anyway. So I went out the front door and got them coming out.

Then we headed down to the public beach. Heath was worried we were going to spend all afternoon looking for a non-existent parking place and then come home without ever seeing the beach. We had no problem finding a parking place. The beach was busy but it wasn’t really crowded and we had a nice section to ourselves near the pier.

We bought sand toys at Wal-Mart and Katy managed to successfully build a sand castle. Her moat wouldn’t hold water, though. 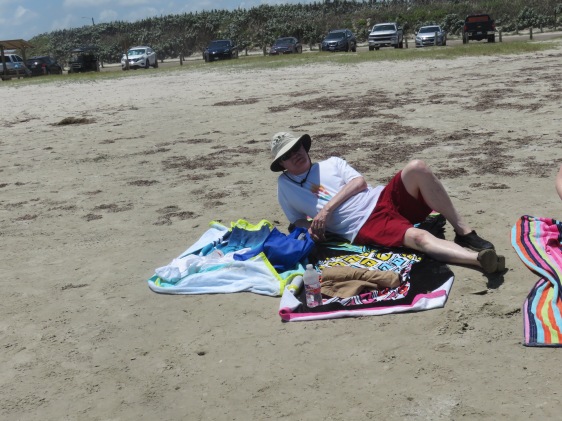 Heath lounging on the beach.

And getting his feet wet.

Katy playing with the beach ball. 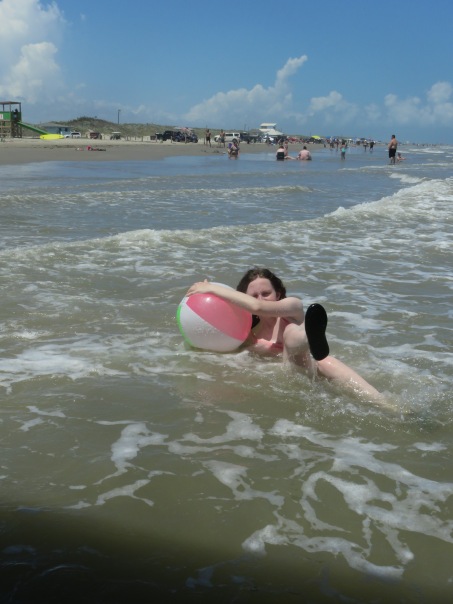 The sun was so bright I couldn’t see anything on the screen on my camera so I was just aiming and hoping and got some pictures.

Not bad for a blind shot.

After we got our fill of sand and water we got cleaned up and walked down the pier.

The last time we were there the sign said “PIE RULES”. Now we still have rules, but a different type of pie. 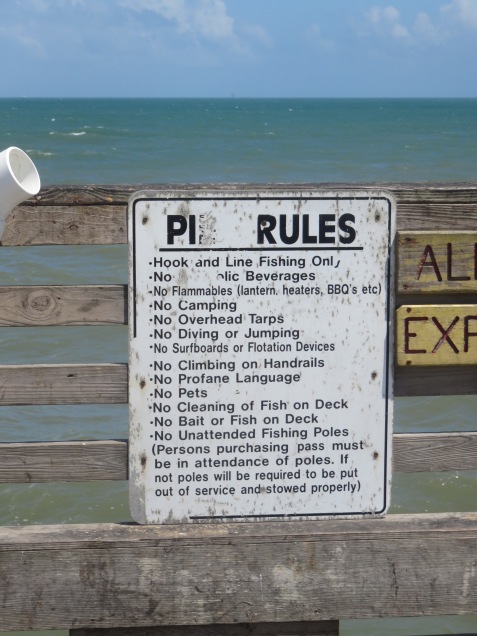 This pelican wasn’t bothered by anything. He was happy to pose for photos.

This is the Dunes Hotel. It has been there for as long as I can remember. It had lots of boarded up windows but it looked like some rooms were in use. It’s been hit by other hurricanes, sort of a risk when you build right on the beach. I have no doubt it’ll fully recover and be there for many more years. 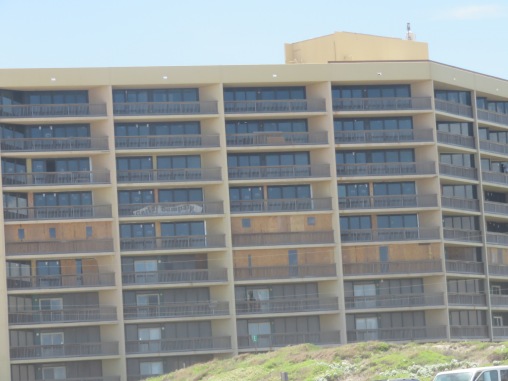 Looking out over the pier. It’s very peaceful. There were several people out fishing and one young man near us caught a small shark. An older man with lots of gray hair and long gray beard said he did really well. He said he caught most of his fish after noon, which is pretty unusual but he stuck around and kept reeling them in. I commented that there’s really no such thing as a bad day of fishing and he said “not really, but if there is you can always go home and drink beer”.

Then it was back in the car (I’m sure the rental company loved all the sand we left behind). I always think you should have ice cream on vacation and Victoria doesn’t have anything really special for ice cream. Port A, however, has lots of places being a vacation spot. We drove by this place and thought it looked cute. I’m pretty sure the ice cream was Blue Bell, not anything they were making, but it was still fun. 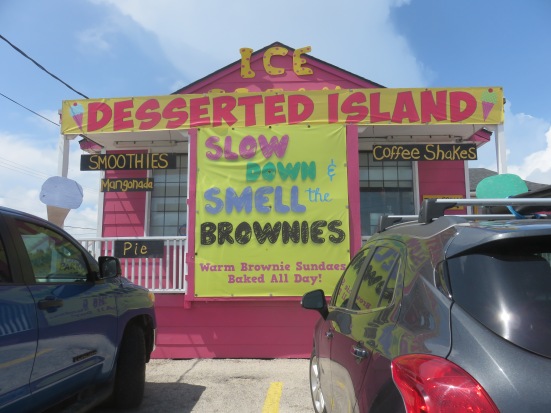 View from the car. There’s a nice city park right there.

And back through Aransas Pass to Victoria. I have made this drive so many times. We used to have our family reunions in Port Aransas. We stayed at Sunday Villas and we cousins spent the weekend in our bath suits. That was the four siblings in my grandmother’s family and all their kids and grandkids. Quite a crowd.

That was about it for the excitement. Victoria never has much in the way of anything to do, nothing seems to stay open for long, but a few years ago someone opened an entertainment center with mini-golf, go-carts, rock climbing and so on. We went out there for a round of golf. Heath  got three holes-in-one. I thought it was 13 holes like Putt-Putt but it was 18. I bailed after 13, the heat was too much and I’d gotten sunburned the day before at the beach. Heath and Katy finished and Heath won, which was pretty much a given.

My dad has a little Pomeranian/chihuahua mix named JJ. He and Katy just loved each other. As we were leaving Saturday morning Katy was walking around with JJ and I told her she couldn’t take him home. She told me Grandma told her to pick him up for a picture.

Guess where we stopped on the way to the airport? 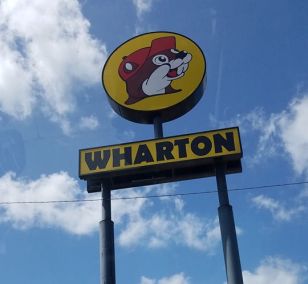 By that time my mother was trying to get ahold of me. There had just been a fatal wreck on the Houston highway headed out of Victoria and the whole stretch was shut down. We were an hour away by the time that happened.

They had their billboards for sale. I didn’t find the one that says “262 miles, you can hold it”. I bought a few things and Katy got her fudge fix. Just one piece this time, not the three-pound box.

Heath was wishing we had planned better and gone to Space Center Houston for the festivities there, although it would have been incredibly crowded. We probably could have squeezed it in if we had known this was going to happen:

The flight was delayed six separate times, we got the first three or so text messages while we were still stuck in construction traffic in Houston. They had a ton of flight cancellations due to weather on Friday and spent all Saturday catching up and were having a hard time getting crews for the flights. Since it was a crew problem and not weather we did get meal vouchers. The 6 p.m. flight to Atlanta got out on time, they had a crew. We finally made it home.