About this time last year Katy came home all excited, the orchestra was going to go to Europe for spring break “next year”. And she wanted to go. The plan at the time was Austria, Czech Republic and Hungary. For some reason Hungary didn’t make the cut in the end. We really didn’t think twice about it, it was such an amazing opportunity. So we sent in the deposit check. This trip was so popular that it filled up two weeks before the deadline. The director said he could add a second bus if it filled up. So he collected deposits to be refunded if he didn’t get enough response. He got enough. A whole slew more kids signed up plus some “tag-along” parents and the extra chaperones for the bigger group. So it was 84 people: 64 students, eight chaperones, 11 tag-along parents and the director. Katy said she was worried about looking like a tourist. I said “80 people in a big group all wearing matching fleeces. People are going to know you’re tourists”. They got some nice black fleeces with the trip logo.

So it’s been a busy year. We went to more parents’ meetings than were really necessary, Katy baked lots of banana bread and worked a few hours a week at the music studio through November to chip in on the cost a little. The last few weeks have been really busy with getting down to the details of filling out forms and having them notarized, figuring out what to take, buying a few euros to be followed by a few Czech kroner as while the Czech Republic is part of the European Union it turns out they kept their own currency and we didn’t know that at first.

I don’t remember school trips being this involved. We signed up for interim semester shortly after the beginning of the school year, the trips were in early February and we cashed our traveler’s checks at the hotel. Or at the airport if you were camping in the outback of Australia or the hinterlands of Nepal. Our parents dropped us off at the airport and came back a week later and hoped we were on the plane. Anyway.

The owner of the travel agency the orchestra is using (Manuela) is really amazing. She’s based in France and started this business because she really didn’t like how her own children’s school trips were handled and thought she could do a better job. She spoke to us by Facetime at our first parents’ meeting even thought it was 2 a.m. in France. Then she traveled to the US twice to meet with us. Maybe she had other business, too, I hope so, it’s long way for one short meeting. She had some packing advice and said “pack sensibly, you are not going on a fashion show”. She also said the weather is so wild she really couldn’t tell what to pack and just recommended some heavier and lighter clothes. It’s the same everywhere.

Packing was tricky, with 84 people and all their instruments space on the buses is at a premium. They told us suitcases 24 inches or smaller and I don’t think Katy’s was even that big. Rolling up clothes really does save space. We got everything packed in. I told Katy if she runs out of space for souvenirs she can leave behind toiletries, socks and underwear.

The group is traveling in two groups, about half on KLM that leaves at 4:55 p.m. and half on Air France that leaves around 9 p.m. So the plan was that the kids would go to first, second and third period, have a quick lunch and then reconvene in the orchestra room. They all left school at once, it’s just far easier so the Air France kids have a long wait. Baggage check-in was this morning from 8-8:40 in the orchestra room and Katy and I got there just after 8. I went in with her, thinking most parents would. Actually most parents didn’t. It was kind of crazy. When we got there a volunteer handed me an index card and said I needed to put name, phone number and USA on the card to go inside her suitcase. I showed her where I had name, two phone numbers and address all typed up and easy to see on the inside. It didn’t matter, her marching orders were “on the index card”. Well, they also had to have a card with contact information inside their carry-on, instrument case and “waist security pouch” (fanny pack). So everyone was sitting around filling out these cards. Would have been nice to know that in advance. The chaperones also had to look in suitcases and verify each student had their black slacks, shirt and shoes. So while Katy was filling out all those cards I was digging to the bottom of her suitcase. I told her chaperone I had put Katy’s clothes in one of the blue clothes envelopes from The Container Store that Manuela recommended (keeps everything nice and neat) and it was on the bottom of the suitcase. If we knew she had to see it it would have been on top. She said “just show me the blue”. Gracious. Everything got checked in, I left and poor Katy had a calculus test first period.

Heath and I and a bunch of other parents went back after noon to pick up school items that needed to come home and see the buses off.  Katy kept texting me saying “hurry up, we’re about to load, my stuff’s going to get locked up”. I got there and found this: 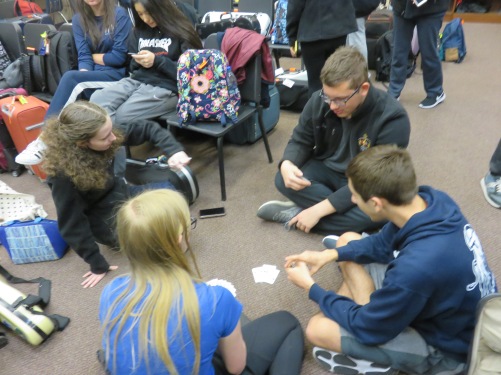 They weren’t near loading. The buses weren’t even there.

Finally the kids walked through the auditorium and lined up outside. And waited. And waited. The buses were stuck in traffic. 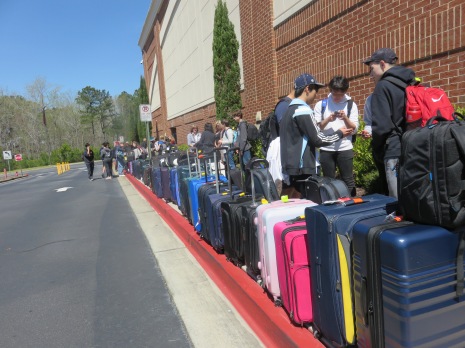 All lined up and no bus to get on. The bus drivers called and said they were stuck in traffic. 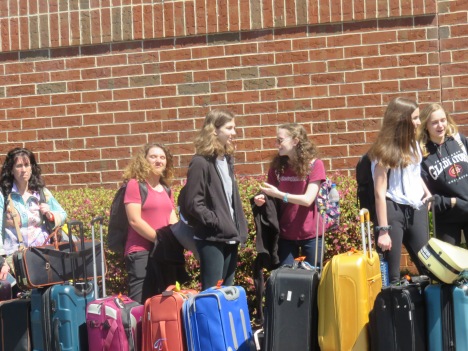 And 20 minutes later we had buses, got everything loaded and off the went. (And I just realized you can see our reflections in the buses.)