It’s time to start the college visits. This is all new to Heath and me, both, as neither of us did this. I was going to visit schools the summer between junior and senior year but with my dad’s job unexpectedly ending I spent the summer in Singapore instead. Not complaining at all, best summer of my life. Heath did one but it was just a quick trip. He was the fourth kid, maybe his parents didn’t figure they needed to.

Back in the fall we visited University of Georgia although I was pretty sure that wouldn’t be Katy’s place. I was right. It’s 40,000 students in a bunch of building stacked on top of each other on 762 acres in the middle of town. She’d like something a little less crowded. So we decided we’d visit the complete opposite. Berry College is just outside of Rome and is 2,000 students (and about a million deer) on 27,000 acres, although the main college is concentrated in one area. There’s a wildlife refuge, a lake, hiking trails, an elementary and middle school, the Winshape Retreat and tons of open space.

There was no school today so we figured it would be a good day for a visit. We’ve made this drive loads of times. Berry is very close to Camp Juliette Low, where Katy attended camp for four summers. Some of the camp units do out-of-camp trips to Berry. And it’s also on the way to Space Camp. So it was a familiar drive. We left a little early and made good time so by the time we got to Rome we had loads of time to kill.

No one wanted to sit on a wet bench for a photo.

It’s hard to see but there is a Little Red Door, just like at the Dwarf Houses.

When we walked in I saw a sign that said “press button for train” but couldn’t figure out what it was talking about until we sat down.

The train ran around the top of the sit-down area.

And like I said, an expanded menu. I had the lunch trio (grilled cheese, soup and a side salad), Heath got some kind of chicken sandwich and Katy got her regular waffle. I say regular because while Heath and I have never been to a Dwarf House, there’s one near the college where the Reading Bowl Regional Competition is held and the team goes after the event so she’s been a few times.

So enough about Chick-fil-A. After lunch we head over to Berry, about five minutes away, and through the “Gate of Opportunity”.

We got there about an hour early. We checked in at the admissions office and were told we were free to drive around campus. As I mentioned, the campus is huge. They have the main campus where the college actually is and then they have the Mountain Campus. Katy wanted to drive up to the Mountain Campus and see the Old Mill Wheel. According to the map it was built in 1930 and is one of the largest operational overshot water mill anywhere. It’s a popular photo spot and we ran into a group of moms and kids that looked like probably a homeschooling group who were doing nature drawings.

Heath checking out the wheel house 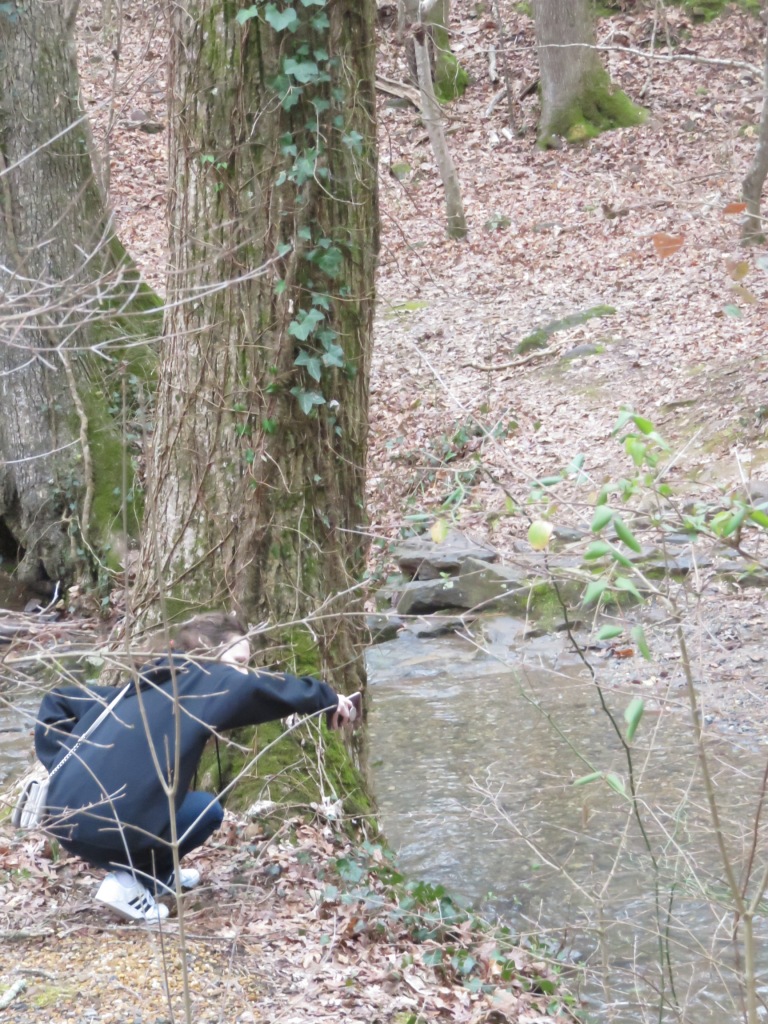 Katy getting a photo.

And the photo she got …

A little history on the mill. You’ll notice it was built by students. Much of the school was built by students. Martha Berry started this private boarding school back in the 20s with the idea that students (middle and high school at the time) would work at the school to pay for their education so poor students could have an opportunity, too. Back then, students made bricks and used the bricks to build buildings that are still in use today. They planted the gardens and cared for the animals that produced the foods they used to feed the students. That concept is the foundation for their work program today. But more on that later.

After looking around some we found our way back to the main campus and the admissions office. Several school districts are off for a long holiday weekend so they had far more people that usually do on a weekday “private” tour.

We had the usual session with the admission counselor and he went over the usual how do you apply, how many kids get in and can we really afford this. He talked about the history of the school and the work program. I knew nearly every student has a campus a job. He said there are about 700 different jobs on campus. We were greeted by a student working at the front gate and again in the admissions office. Students can work in information technology, milk cows, be a science lab or research assistant (even as a freshman!), operate a small business. He said you could work whatever job you want but they try to give students a chance for experience in whatever field they are going into, then at graduation you already have four years of some related experience. Pay isn’t much, it starts at $7.25 an hour (Georgia minimum wage) and goes up to a whopping $7.95 an hour. You can have it all applied to your school bill, get it all for pocket money or split between the two. Students work about eight-10 hours a week. They also have another work scholarship where you work year-round and make more money.  He said the work program not only gives students practical experience and a paycheck but it gives a students a stake in the school when they feel they have a hand in helping to run and shape it.

Did you catch the part about milking the cows? There is a big animal science department with a variety of animals. There were several students in the group interested in animal sciences and they had a separate tour of that part of campus earlier in the day.

After his sales pitch it was off to a two-hour tour of campus. We lucked out, it was supposed to pour all afternoon and we just got a few sprinkles. 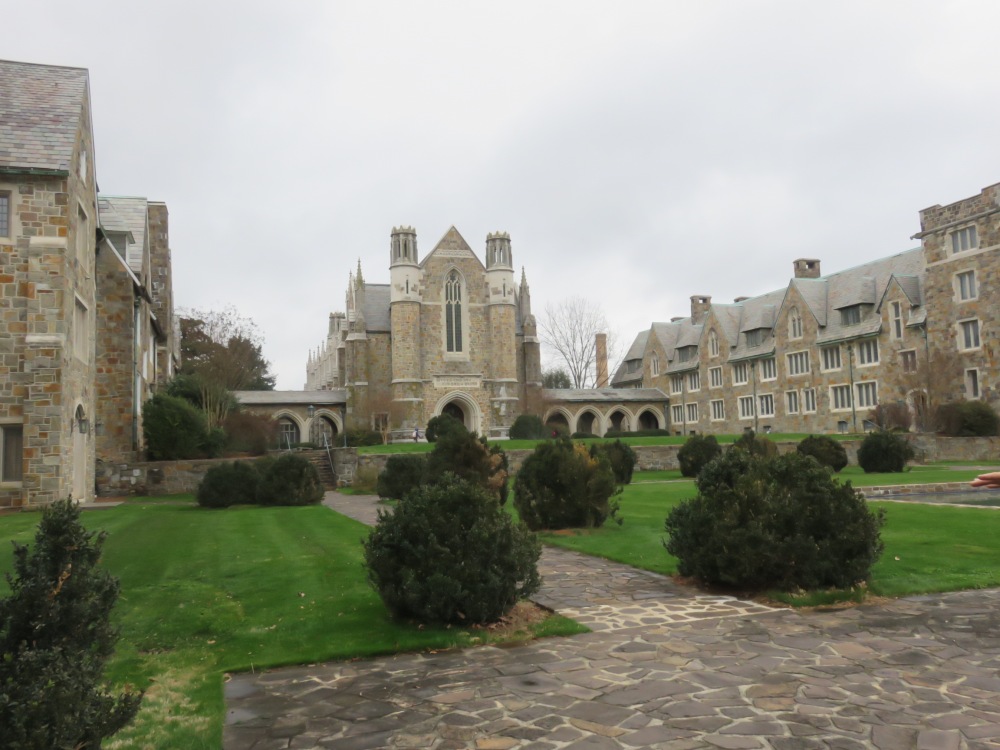 These are the buildings right outside of the admissions office. This was originally the women’s school (the men’s school was another part of campus) and one of the student tour guides said “they though girls should be treated like princesses, so they got castles.” The campus also has modern brick buildings, log cabins and a variety of other architectural styles. It looks like anything that’s been added onto over the years.

The building in the center houses the cafeteria. The training camp scenes from the movie Remember the Titans were filmed here. You might remember the scene where the team is in the cafeteria and one student belts out The Temptations, I believe. This was the building. It didn’t have cable, Denzel Washington said “that won’t do” and the next week they got cable.

Close up of the entry way.

We went through the cafeteria. College cafeterias have certainly changed since I was eating Mystery Meat.

So it was off on the bus/walking tour. We were able to see a dorm room, go into the library and the student union. We also got to go into one of the science labs. When Katy signed up under “special requests” she had said she wanted to see one.

The tables were prepped for a lab. Yes, that is a piglet on that tray.

Academically, this is exactly the kind of school Katy would like. Introductory classes have 30-40 students, when you get into more advance classes, it’s about 10-20. While they have teaching assistants, they just assist, the classes are taught by professors. And with small classes there’s lot of opportunity for questions and discussions, not just lectures. There are lots of opportunities for international travel. Biology students go to Honduras and study the coral reefs.

Heath noticed the pendulum as we walked through the science building. It was the largest pendulum in the southeast until someone built one bigger.

The entry way to the library. College libraries have changed, too. Mine sure didn’t have a coffee shop and pizza rolls! Although I visited campus a couple of years ago and they’ve added a coffee shop. Anyway.

The other reason I really thought Katy would like Berry is its emphasis on the outdoors. Our tour guide said everyone is really outdoorsy. Of course today everyone was in class and it was overcast and sprinkling. But in the warmer, nicer weather the hammocks come out, picnics are held, there are several miles of hiking trails, a lake for paddle sports and designated camping areas. Camping equipment is available on campus to borrow or rent for just a few dollars. Many campus events are held outdoors, including a huge field day/carnival type weekend in October.

One thing Berry is known for around the world is its Eagle Cam. In 2012, the school was all set to build a new football stadium. They had the site all picked out and then a pair of bald eagles showed up and built a nest in one of the trees close to the site. Well, bald eagles are protected by federal law so they made that area a protected area. Well, the field site was far enough away to comply with the law but the school decided they wanted to give the eagles a little space and if there’s anything Berry has it’s space, so they moved the new stadium 300 yards away. They also set up three cameras trained on the nest and millions of people around the world tune in to watch them. Heath has been following them for years.

Our tour guide pointed out the site and after the tour we went over there for an up-close look. 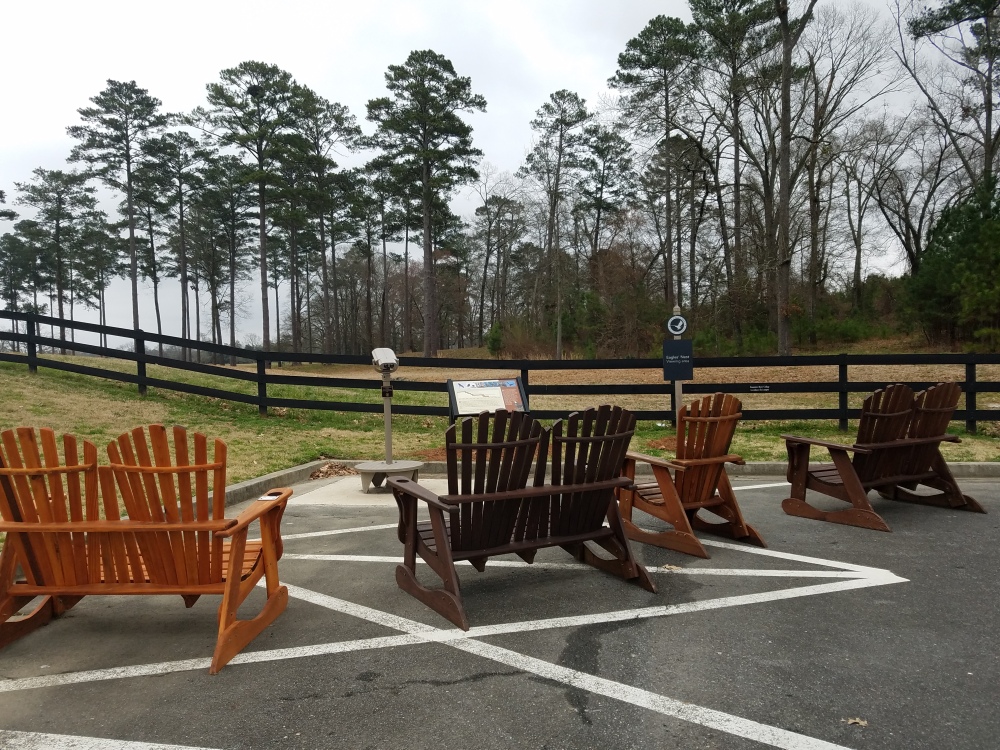 There is a viewing area set up! The thing in front of the chairs is a pair of binoculars. We looked through it but couldn’t see much. Heath looked online and the mother was in the nest with two eggs. 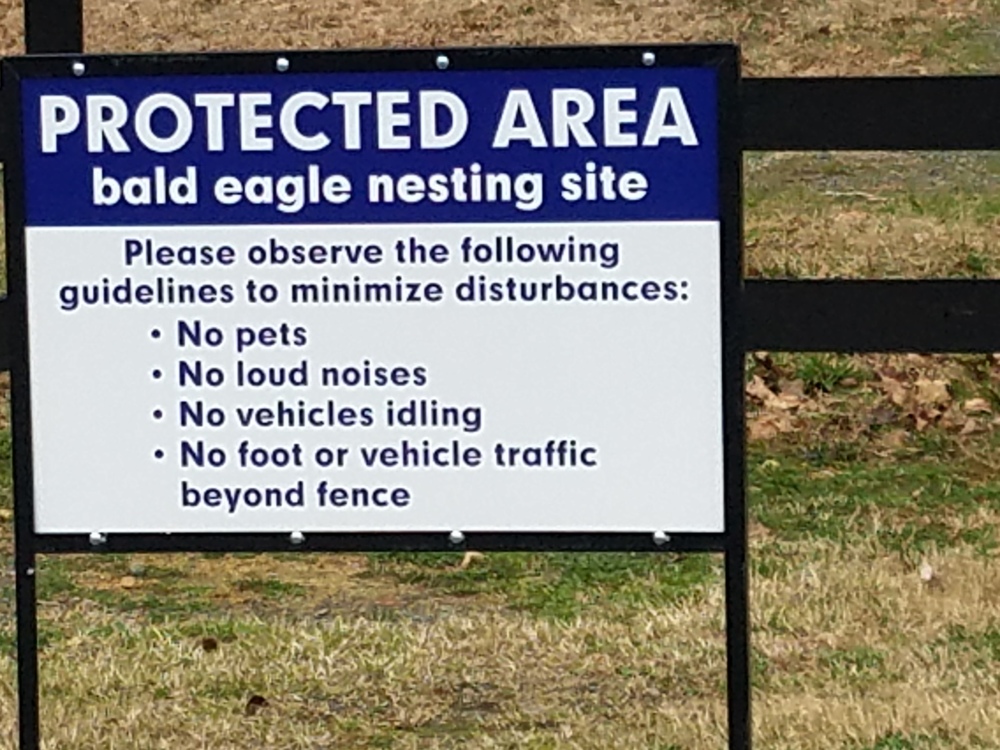 Sorry for the blurry photo. The black blob is the nest.

And this is the camera, if you’d like to look.

So after we checked out the nest, we headed home and it started to rain. Heath commented on two things as we left. He didn’t see a single deer (lots of geese, though) and everywhere we went our tour guide ran into someone she knows. Katy didn’t have much to say. The information session kind of had her overwhelmed and the weather wasn’t doing much but she did like it. And she got a t-shirt, too. I thought that was nice.