Pasar malam is Malay and Indonesian for “night market”. These are markets that are held in Singapore, Malaysia, Indonesia and probably other places. And I’m sure other countries have similar concepts. Vendors set up stalls in the evenings and people come out and eat and shop. A little like a flea market. They’re often in neighborhoods but we used to go to a monthly one on the top deck of a carpark.

There is a company here that sponsors international night markets and they had one in the parking lot of one of our local malls. I didn’t know much about it but thought it was worth checking it out. It runs from 5 to midnight Friday and Saturday and then earlier hours on Sunday. We got there at five Friday nigh and most places were just setting up but we got a good parking spot and missed most of the crowd. We stopped at the ticket booth and Heath asked for three adult tickets. The young man looked at Katy and said’ 12 and under gets in free”. I keep telling Katy when she hits about 30, she’ll appreciate looking younger. I’m not sure she believes me.

It was an ideal place for beer-drinking vegetarians and vegans.

We went over to the food first. A few places were still setting up but the ones that were ready to go had no lines. I saw the sugar cane juice and made a beeline for it. You don’t see sugar cane juice very often and it’s not really a make-at-home thing.

The video is of sugar cane being squeezed. The guy thought I was taking a picture and stopped to pose for me.

There was so much good food to choose from. I wanted to try something new so we went to an Egyptian stall and had something that was a bowl of wild rice, macaroni, chick peas, fried onions and tomato sauce. It wasn’t real thrilling but we did try something new. The guy was surprised when asked for three forks. When we go to things like this we all share everything so we can try more things without overeating any more than is totally necessary. 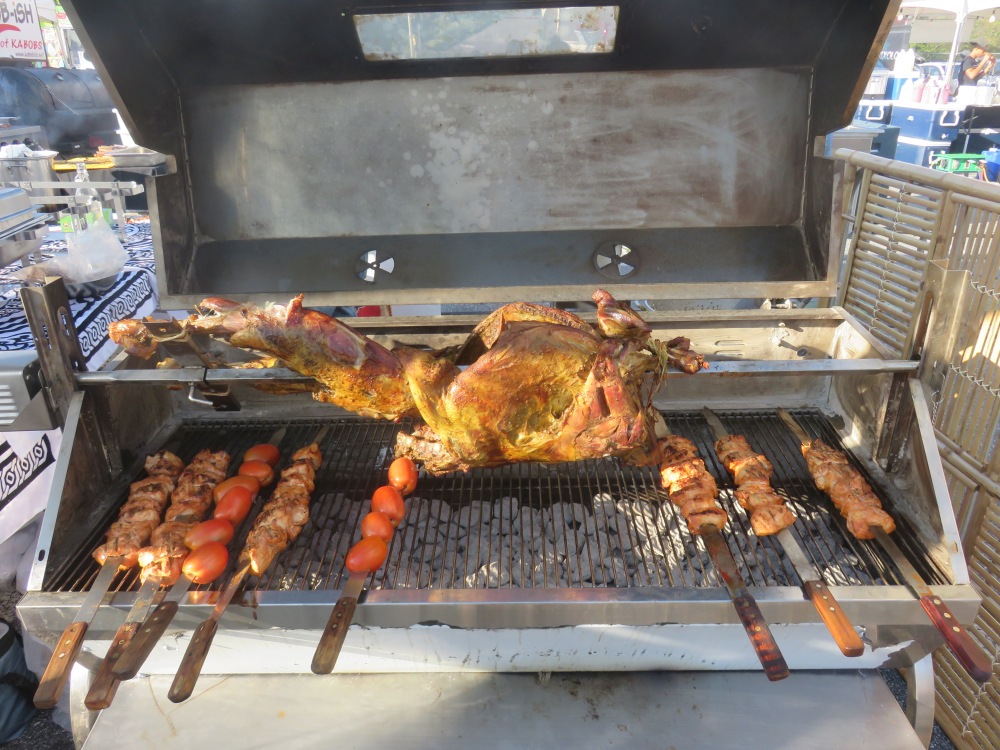 This is meat cooking at the Egyptian booth. I’m not sure exactly what’s on the spit ,but it was pretty interesting looking. 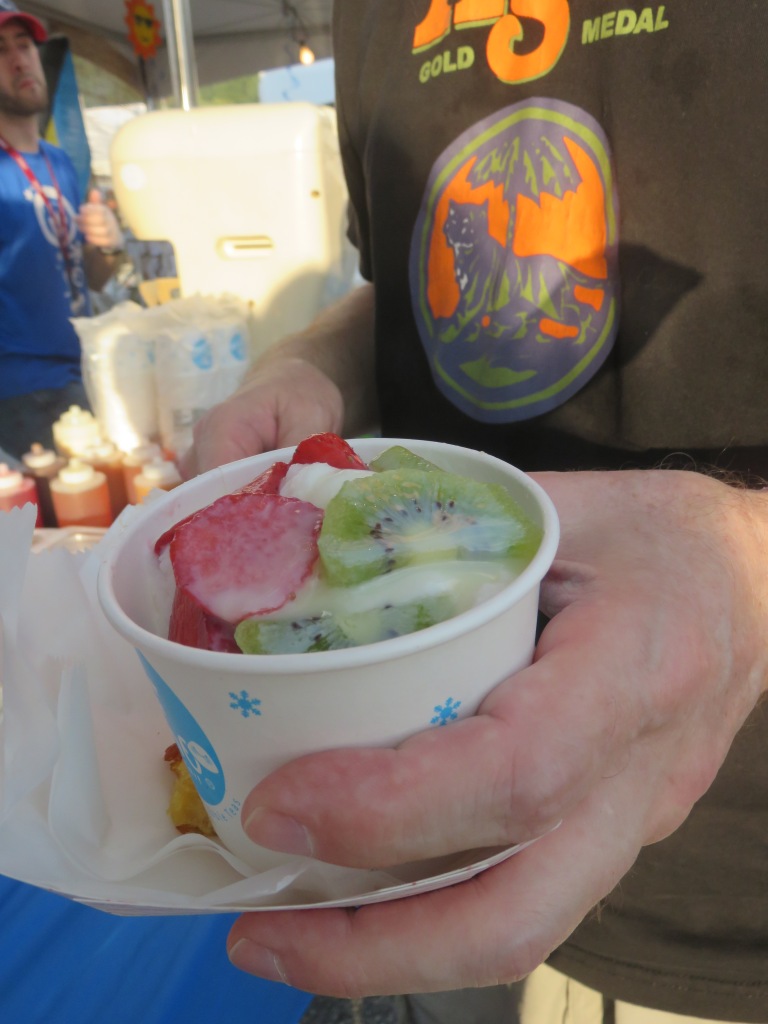 Suno Ice was there. Katy had it a few years back at the Malaysian Association Event but didn’t remember it, so we got some. Sumo ice is a bit like ice kacang (which is a bit like a snow cone but with milk poured over it) except instead of pouring milk over the shaved ice, they dilute milk with a lot of water and then freeze and shave it. What you end up with is something not quite as creamy as ice cream but not as icey as shaved ice. It’s not quite frozen milk, either. It’s delicious and Katy was very impressed when she tried it. I showed the employees of the photo of her having it at the MAG activity. I told them they should open a shop in Johns Creek, it would do very well.

We went to a Chinese booth that had something they were calling an omelet. It was a piece of roti folded over with a sliced, grilled weenie in the middle. It was good. They also had chicken and beef skewers so we tried a chicken one.  It was good, but I prefer the peanut-seasoned satay. 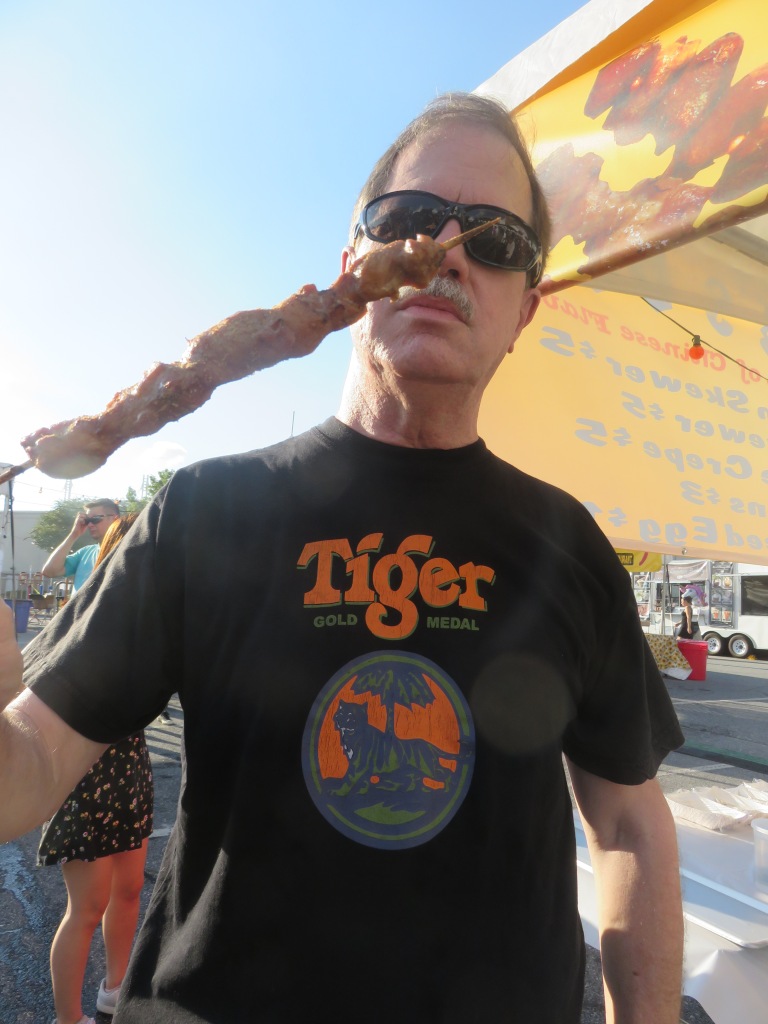 Heath was disappointed the Thai stall was out of fried bananas but we found fried plantains (really they both use plantains, just different seasonings) at an empanada stall. While he was waiting on that I wandered over the Jamaican booth next door. I didn’t get any food, but I did get a picture. 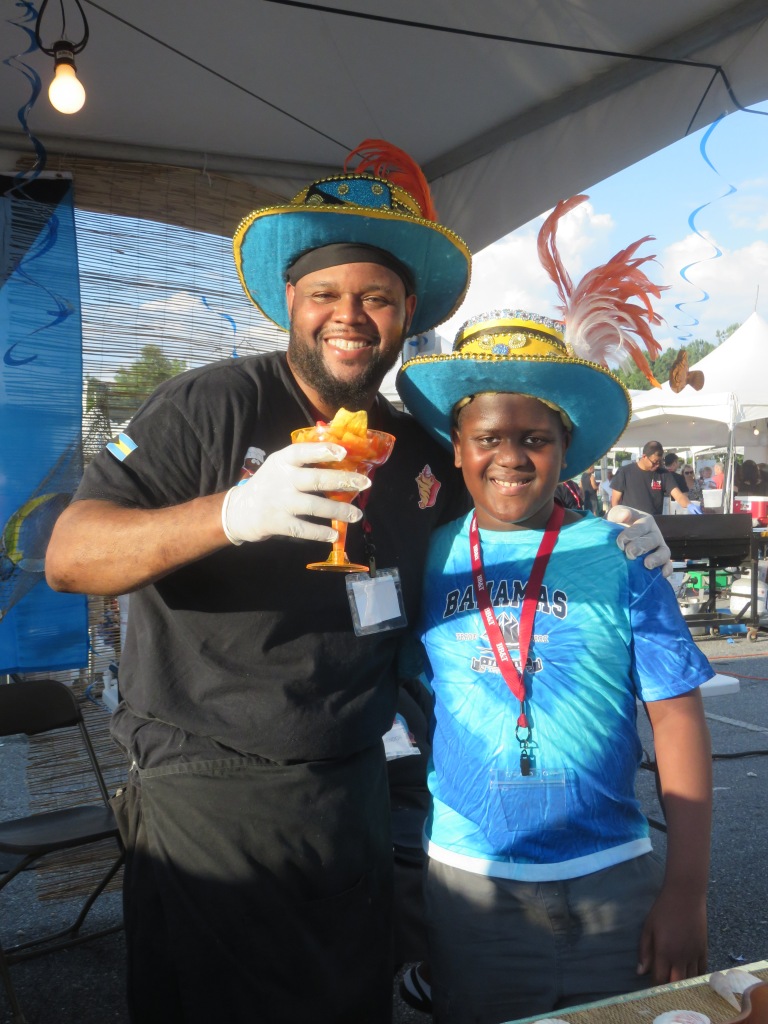 I don’t think the little boy really wanted his picture taken but his dad made him.

And while hanging around still waiting on the fried plantains, Jasmine and Prince Whatshisname walked by. Katy didn’t want her picture taken, so I got mine.

I really don’t know what they were there for, exactly. There was an entertainment stage so they might have had a performance at sometime.

After we decided we should let our stomachs settle before putting anything else in, we went to look at the merchant and display booths.

There was a neat Vietnam booth.

Katy and Heath tried out the tri-shaw. The guy running the booth was going to ask the tri-shaw owner where he gets his tires and get back to me. My dad has a gorgeous tri-shaw from Indonesia but the rubber tires have worn out and he can’t find replacements as they aren’t a standard size. Hopefully this guy can help us out.

We had a good talk. He was telling me his father was in a re-education camp in Vietnam for many years and then was able to come to the US on a refugee visa. I told him about volunteering at the Vietnamese refugee camp in Singapore and about some of my neighborhood friends who are Vietnamese. 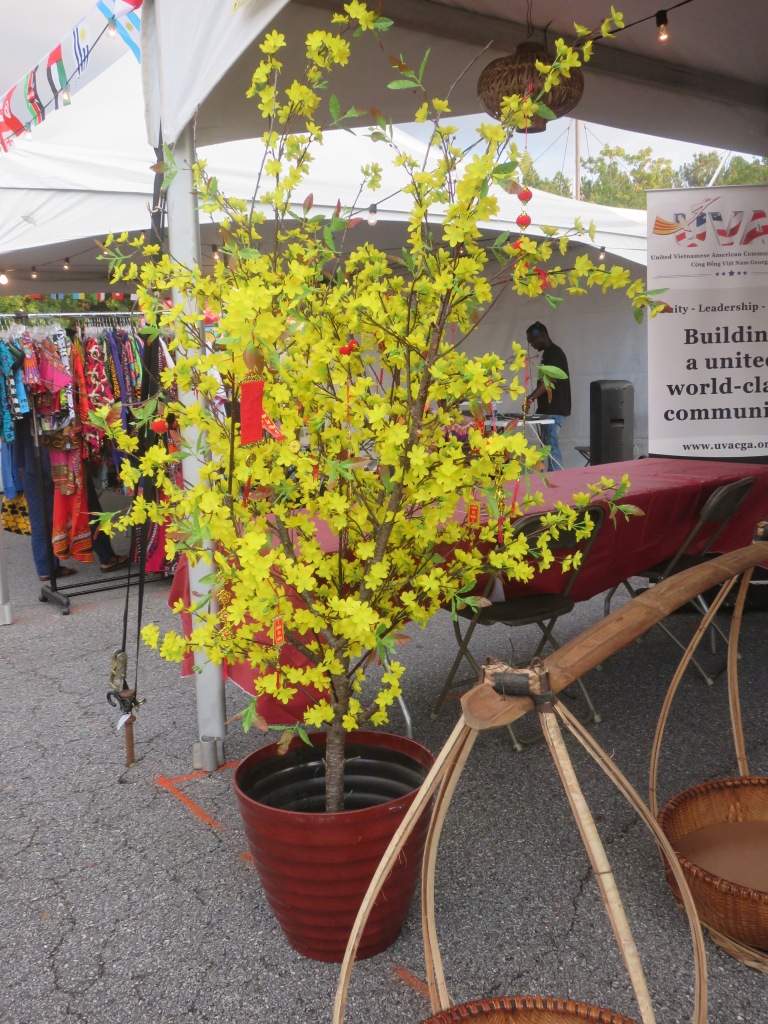 This is a pretty plant that grows in Vietnam and only blooms for a short time.

The Taiwan tent had a lion dance costume laid out. It wold have been fun if they could have done a lion dance. The Vietnamese booth had two lion heads on display. If you’ve never seen a lion dance you’ve missed and interesting — and loud — experience.

This booth was selling Turkish towels. They don’t really work as towels, they aren’t very absorbent but they are great for a wrap, small blanket or a bathing-suit cover up. Katy picked out a pretty purple and gray one. So that was our one non-food purchase of the night.

This was an African booth and I really liked this baby swing. If I had a baby, I would have bought it.

Around 7 they had an opening ceremony with a mariachi band, flags and children from various countries. After the parade made its way to the front the emcee was calling off countries and asking who represented them and there were lots of enthusiastic responses.

Besides international displays there were also two or our original American cultures represented.

I’m not real sure what these ladies were doing but I got their photos while they were at the photo booth. They might have been performing, too. There wasn’t any kind of map or entertainment schedule available when we got there but I think there might have been later.

This Lakota Sioux tipi is owned by a man with an interesting story. You can enlarge the photo with the information and read it. 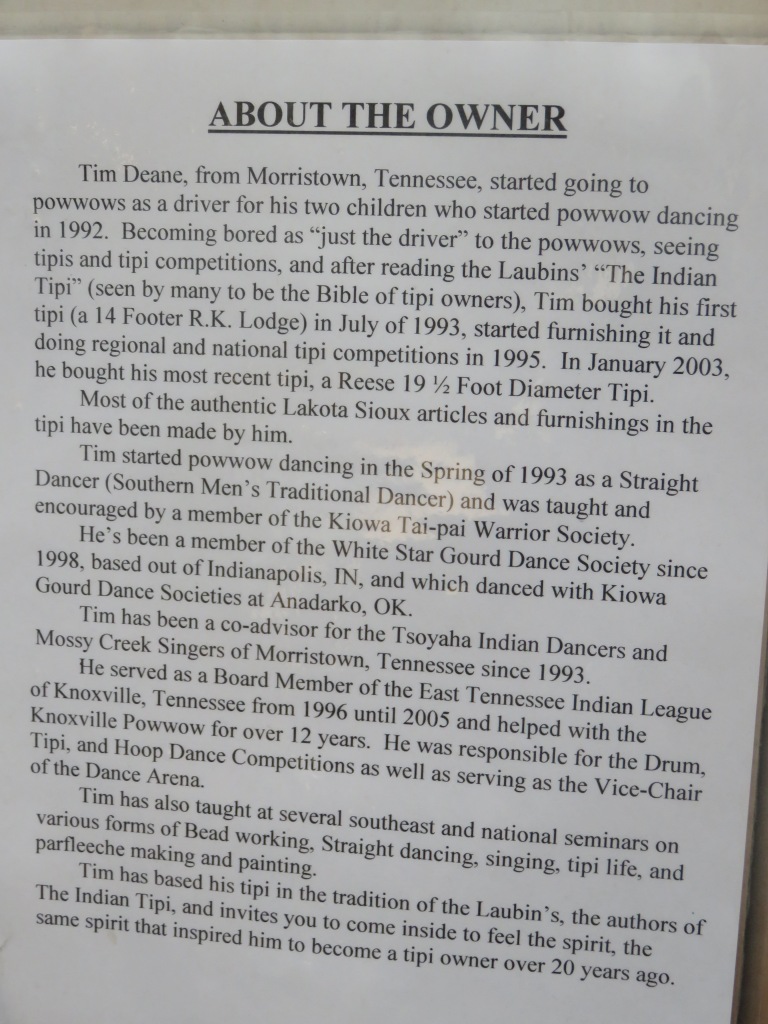 There were Caribbean stilt walkers who were a major attraction. This guy was walking around during the opening ceremony and I think there were more people looking at and taking pictures of and with him than  were watching the stage. 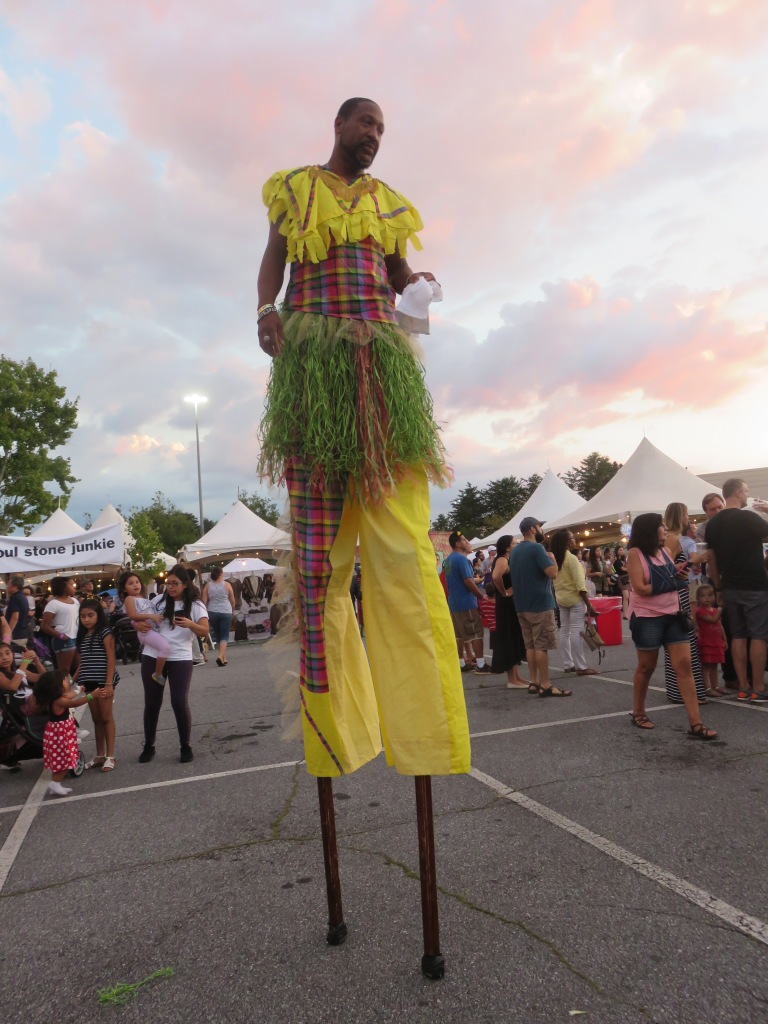 Katy laid down on the ground to get a photo and then showed it to the guy (she had to stretch way up) and he liked it so much he asked her to text it to him.

We also ran into this guy who was also very popular.

It’s a person in a costume, but it has air blowing through it and he was having a hard time maintaining his balance and had to take a step backward every now and then.

By that time I was thirsty again and thought another glass of sugar cane juice sounded good. It was about 7:30 by then and really crowded. The sugar cane place was at the back and we had to wade through the crowds in the food area. I noticed all the lines were really long. This is why I like to get to places when they open.

While I was waiting on my juice Katy looked around and noticed Not So Famous Cookies. They decided on a deep-dish cookie (a cookie baked in a pie pan and I think they got some kind of chocolate) with a scoop of vanilla ice cream on top. And neither one of them thought to ask if I wanted a bite!

By the time they finished, it was 8 and we were ready to head home.