As we were packing up our stuff after the Old Soldiers’ Day Parade in Alpharetta this morning I noticed the Shriners didn’t have any clowns and usually there’s another clown or two  in there somewhere, too. The Shriners did have a cool pirate ship, though.

The Old Soldiers’ Day Parade is an old tradition in Alpharetta. It starts with a run early in the morning, a program with music and speeches and then the parade. Since it’s the only parade going on — unlike at Christmas or Fourth of July when there are competing activities — it’s a long parade with usually about 150 entries. We noticed none of the high schools located in Johns Creek participated. Anyway, here’s a history, it’s pretty interesting.

The rain has decided to take a break and we had really nice weather. There was a C130 fly-over at the beginning of the parade. Katy tried to get a photo and got a little excited with the zoom. 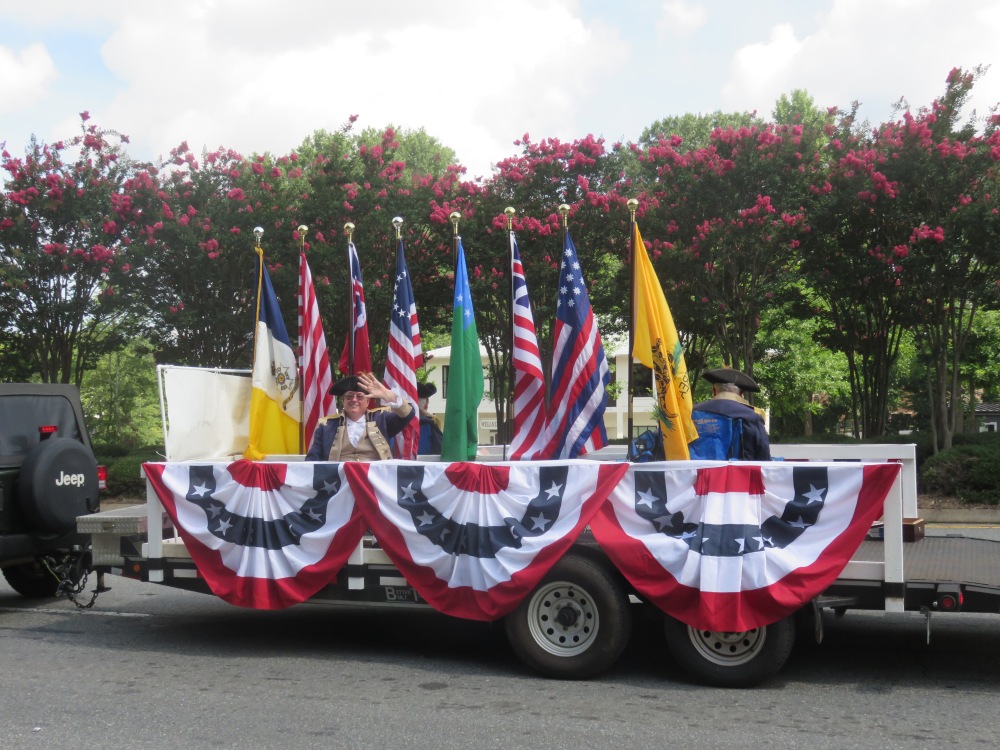 This was a Mormon float. Apparently Gail Halvorsen, the Candy Bomber was a Mormon. If you’ve never heard of him — I had! — he dropped candy from his plane during the Berlin Airlift, earning quite a name for himself. I mostly liked the Snoopy.

Besides veterans and their families there were the usual bands, clubs, businesses, old cars, politicians.

A unique thing about this parade is the candy. By the pound. We always sit at the end of the route where everyone is trying to get rid of the candy but there’s a lot the whole route. This isn’t a parade where you just sit and watch, you have to run out and pick up candy. Some people just drop a handful in your bag, too.

It was a hot day so a few people had squirt guns and spray bottles and Katy was happy to be sparyed and squirted.

The parade ends at the Foreign Legion where Varsity has free hot dogs and sodas for everyone.  We’ve gone a few time but not today.

When we got home we had the traditional “weighing of the candy”. It was four pounds, 9.7 ounces. Our record is eight pounds. I told Katy she can take it to Sunday School in the morning.