After my Grandmother’s funeral I was back home just long enough to unpack, wash clothes, repack, take the dog to the vet for boarding and leave again. This time it was a planned trip for a happier occasion. Heath’s niece, Molly, was getting married. Well, she actually got married back in September, I believe. Her husband was going to adopt her three children after they were married and a friend advised not to wait in case it took a while. So they got married and the children’s adoption went through on Dec. 27, much faster than anyone had imagined. Matt was fine with just the small family ceremony but Molly wasn’t about to let that fancy wedding dress she had already bought go to waste and still wanted to have the big celebration with all of the family and friends. So the June date was still on.

We left home Wednesday morning toward the end of rush hour and ended up in the traffic back-up from a fatal car accident that had happened a few hours earlier. We landed in Milwaukee mid-afternoon and went to check in at the hotel in Neenah, where the wedding was going to be held. Usually we stay with Heath’s sister, Lee, but decided this would be more convenient. We made a quick run to Pick and Save (the hotel didn’t have a free breakfast!) and then went to Lee and Chip’s for dinner. Katy was in animal heaven.

Molly and her family came over for dinner (they live on the old farm about a mile down the street). We got to visit with them and I gave them their presents. I wanted something kind of special for Matt and Molly and then I wanted to get something for the kids, too. They got a new dad and a new last name and the boys picked new middle names as well. Molly said it took a few weeks to get used to saying their new middle names when they’re in trouble. So I wanted something to commemorate that and started looking around on Etsy.

Thursday we had a few hours to kill before heading over to Molly’s sister Elizabeth’s house for the rehearsal dinner. We checked out “things to do near Neenah, Wisc.” and came up with the Gordon Bulboz Nature Preserve in Appleton. The main trail was closed as it gets really muddy in the summer but we did one of the smaller trails and checked out the turtle pond. We gotten eaten by mosquitoes (and something that caused bruising, as well) because I didn’t think to pack insect repellent. I should know by now that if I go on vacation with Heath and Katy and we aren’t looking at rockets, we’re going to be traipsing through the woods somewhere. But it was really pretty.

We went back to the hotel and Heath and Katy played miniature golf and I took a nap.

That evening was the rehearsal dinner. It was a cookout/potluck in Elizabeth’s backyard. There were quite a few people as they each had eight attendants (although that included the three kids) and Matt has something like five brothers, plus the whole Harvey-Jones clan.

My contribution was fudge I bought at Buc-ees on my trip to Texas.

Friday was the wedding. It started at 6 but we had to be there at 3 for family photos. Our room was on the ground floor of the hotel so everything was just right down the hall from us. You went from the end of the hallway with the lobby and rooms to an area that was set up to look like a street. It was very nice and luckily a great place for photos as it was too hot to go outside for very long.

The ceremony was very nice. I’m short so I didn’t get any good pictures. A friend of Molly’s did the ceremony back in September and then this one. She got a license online and assured everyone “it’s totally legit”. The county filed the certificate last fall, so it must have been. 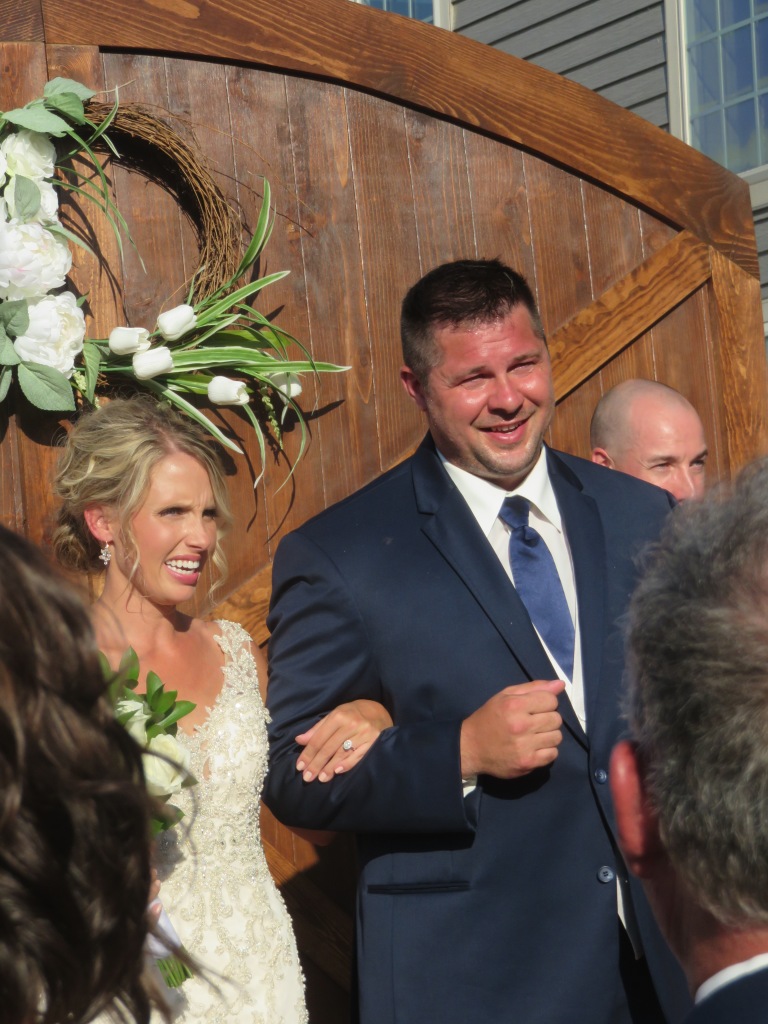 The reception was about 15 steps away in a ballroom. Katy had a choice of sitting at a table with us and other (boring) adults or at the table with all the little girls. She picked the little girls. Her cousin Ethan is only two years younger but he was sitting with the bridal party and his girlfriend was sitting with her grandmother so there really wasn’t anyone her age. Ella had a choice of the head table or the kids table and she picked the kids’ table. After dinner started, Evan and Ethan were looking like they wished they’d picked the kids’ table. (Evan is in the picture below as I took it before dinner started.) All of the girls, including Katy, very carefully poured their Shirley Temples into their wine glasses without any spills. They thought that was fun.

All of the children had a dot on their place card indicating they were supposed to get a kid’s meal. Katy pointed out that she was the only one not getting a kids’ meal. She ended up with the kid’s meal, anyway. From our table, Heath could see as the waitress was putting the plate down that Katy was really making a funny face. I walked over there to tell her it was OK to ask for the adult meal if she wanted. Katy isn’t real sure about speaking up sometimes. She assured me and the server that she was “totally down” with chicken tenders and smiley-face french fries.

Meanwhile, at the grown-up table. Heath and I were sitting with Lee and Chip and some of Chip’s family. We had a half a chicken and as I was trying to figure out how to cut it I moved it around and said “there’s stuffing under here!” so everyone started moving their chicken around to find the stuffing. You couldn’t see it at all. Everyone had chicken. I wondered about dinner because RSVP cards usually ask you to make a meal choice and this one didn’t. Molly said “we tried the chicken, it was good and I decided everyone could eat that or there’s a restaurant down the hall”.

One neat thing they did was a photo booth instead of a traditional registry. The photographer was set up in a corner and had a pile of props. He took the photos, printed them right then and you could stick yours on a piece of paper with tape runner and write a message and they would all be assembled into an album later. I love this idea.

The photo booth was really popular, the photographer stayed busy all night. A gaggle of Jones’ cousins made at least three trips. That was as many as I saw, anyway.

And after dinner was the dance. Most of the night would have looked like a middle school dance if it hadn’t been for the bar. All the girls were on the dance floor, most of the boys were not. They played the Cotton-Eyed Joe and Katy was the only one who knew the official dance but learned really quickly it wasn’t choreographed for a tight dress. Heath had to run back to the room to do a little work (month-ends are hard on him) and missed the grand entrance of the wedding party, which was quite entertaining.

Heath, Katy and I called it quits about 11. They had the ballroom until midnight and then Molly, Matt and a few others moved down to the bar and closed it down at 2 a.m.

Saturday we were in no hurry to wake up. Elizabeth and her husband, John, and John’s parents, have gone in on a little cabin on a lake. It’s still under construction but is finished enough to enjoy the lake. We went over there Saturday afternoon with Lee and Chip, the girls and their family and Chip’s sister and her husband, daughters and grandkids. Actually I’m not sure who all was there. We enjoyed swimming.

Katy finally gave up on the water and kicked back on Meghan and Brandon’s boat. The cabin and Meghan’s house are both on what’s called the Chain O’Lakes and you can get from one the other by boat. We had a cookout later that evening at Meghan’s and Katy rode over on the boat. She was excited to get to drive it and then help tie it up at the neighbor’s dock where it’s kept.

So we packed up and headed over to Meghan’s. Brandon had hamburgers on the grill and a Crock-Pot full of brats. And there was all that leftover potato salad from Thursday! Not long after we got there, as the kids were all on the couch in the basement watching Cake Wars, the electricity went out. The house in on well water with a electric pump so that meant not water, either. Not too big of a deal as we were all going to eat on the deck, anyway. Well, the sky got dark and the wind started blowing so we started bringing food inside. Where it was pitch black. Luckily, the rain held off so we were able to eat outside after all.

After dinner, the games came out. Sydney and Kelly (Chip’s niece) played stand-up Jenga and Katy joined in for a second game. Things got a little dicey when one of the dogs decided to stand next to the wobbly tower and wag his tail.

That night was kind of interesting. The fire alarms went off shortly before midnight and jolted all of us out of bed. Down the hall a lady stuck her head out of her door and said “don’t worry, it’s just my husband’s CPAP machine”. A few people assured her it was a fire alarm and it was going off everywhere. Whatever happened, there wasn’t a fire. It went off again once about 30 minutes later but we figured it was still on some kind of a cycle. Well, the next morning as we were packing up and it was going off continuously (before there was an alarm every few seconds). Something was clearly wrong with the system. So at that point we checked out a little early and head for the airport. We had a three and a half hours to kill so browsed through an enormous (for an airport) used-book store and a little aviation museum all in the terminal.

It was a quick, busy weekend but a whole lot of fun.