Katy somehow managed to get all into Japanese animation. I don’t know how that happened and half the time I don’t know what she’s talking about but she enjoys it. Atlanta is home to Anime Weekend Atlanta, the largest Japanese animation convention in the country. DragonCon is a bigger convention but is for a variety of animation, fantasy, fiction and so on. Last year Katy attended Anime Weekend Atlanta with a friend just for Saturday (it’s a four-day conference). She had a great time and decided that you really need two days to get the most of out of it, especially if you plan to spend time shopping. The convention is at the end of September and I was already starting to think about her birthday in December. I told Heath Katy never really wants anything for her birthday but she loves going places and doing things. I suggested we give her two-day tickets and a night in a hotel for her to go to AWA this year. She’d have to wait 10 months to get her present but she would really enjoy the anticipation and the preparation. So that’s what we did.

I got a video of her opening her gift.

Katy isn’t real demonstrative, this is very excited for her.

So she decided to invite her friend Emma and gave Emma plenty of time to work on her parents. Katy decided she was a little under-dressed in her costume last year. Heath and I picked the girls up in the evening and looked around and she was a little under-dressed. So for this year she decided to go as Sapphire from the cartoon Steven Universe (there was a whole panel discussion on whether SU is actually anime) and a very ambitious sewing project. Katy and I spent about two weeks going back and forth to Joann’s for material and sewing notions. Katy didn’t have a pattern for the dress so she just did it in pieces and found instructions online for various components. Emma went as an “OC” — original character — and based her costume around last year’s color guard uniform.

The big day finally came. Katy got up at 5 Saturday morning to start putting make-up on and getting dressed. I had her over at Emma’s about 6:20 as Emma’s dad offered to drive them over to the convention hotel. It’s held at the Waverly Hotel in Cobb County about 30 minutes away, depending on how many wrecks there are on the highway.

You can only buy the four day tickets in advance, everything else goes on sale at 9 a.m. Last year Katy and Anna got there a little after seven and had their tickets by about 9:05. If you get there close to nine, you’ll still be waiting in line for two hours but you’ll have lost two hours you could have been inside. So the plan was to get there early again this year. After a stop at Starbucks, of course.

I really have no idea what they did all day. Shopped, watched videos, went to panel discussions. They had lunch at Jason’s Deli and Katy said “we sort of scared the guy”. Emma looked like she’d been in a fight and Katy was blue so it’s understandable. 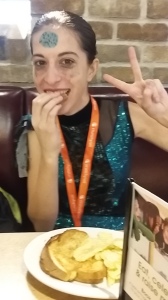 Our reservation was at the Embassy Suites across the street. I looked at rooms in the Waverly when I was making reservations. They were way out of our price range and there was nothing available. I think people make the next year’s reservation when they check out so it fills up quickly. Not that we could have afforded it anyway. I also wanted a suite. I let the girls have the room and I slept on the couch in the little living area. Or would have slept had either the couch or the hide-a-bed been the least bit comfortable. So hotel check-in was at three. Heath drove me as I’m not big on highway driving. It’s just as well, there was no parking, people were parked in the fire lane, on the curb, in the grass. He was lucky to be able to pull up to the front door and drop me off.

So I got into the room and then walked over to the Waverly. I caught up with the girls about 4:30. Katy had texted me earlier to say she’d over-heated in her costume but had a bottle of water and a Snickers and was starting to feel better. So she had taken off her wig, gloves and blue arm sleeves. By that time both girls were ready to head back to the hotel for a shower and change of clothes.

Around 6 we walked down the street to a shopping center that had lots of restaurants and settled on Chipotle even though they had a sign on the door that said they didn’t have any guacamole.

One of the drinks on the soda fountain had a sign that said “not a winner”. The girls were curious as to what that meant. I finally pushed the button and watered-down soda shot out in every direction except down. So “not a winner” is Chipotle-speak for “out of order”. The girls were completely intrigued and decided they are going to print up buttons that say Not a Winner and sell them.

After dinner they wanted to go back to “the con” and look around. Pretty much everyone was milling around in the lobby. There was some good people watching. I went to the second floor and got a photo of the lobby from up there. The girls went into a video room to watch some videos and I actually found a comfortable chair to sit in and wait. 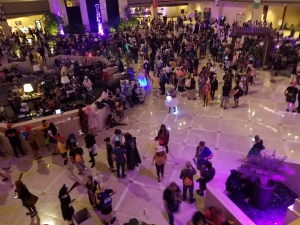 It’s kind of hard to describe the energy but I imagine it’s like any other large gathering. Everyone was really nice, photos are a big part of it and everyone is willing to pose for a photo.

I got the Dr. Who people for Heath. 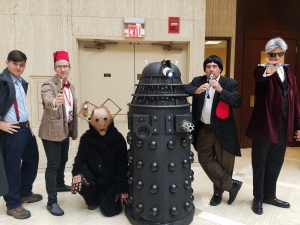 Most of the following photos are off Katy’s phone and I have no idea what any of them are. I took the turtle photo. I thought they were cute. And Katy’s phone takes terrible photos so excuse the quality. 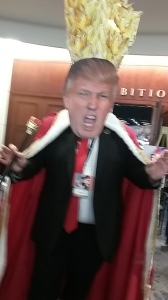 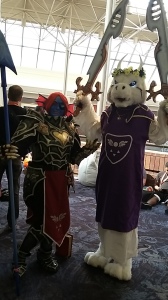 Sunday morning we got up a little early to beat the breakfast crowd downstairs. We ate and walked over to the Waverly about 8:30. The place was pretty empty at that point. Katy and Emma decided to go for simpler costumes Sunday. Katy wore the Dipper (Gravity Falls) costume she wore last year and Emma went as Chara (Undertale video game) wearing the sweatshirt and flower crown Katy made for her Halloween costume last year.

They were both real excited to go to Nerd Church at 10:30. The description was parallels between geek culture and biblical heroism. Katy said it was really interesting and he talked about the etymology of some of the words in the Bible. She also said this was the guy’s first time to ever actually give his presentation. This is only his second time to be on a convention schedule and at the first convention no one showed up. But he’s on the schedule for ComicCon in LA next year.

There are several people involved in anime there, voice actors, artists and so one. Many come from Japan with interpreters in tow. One voice actor Katy really likes was there. He was in a dealer room taking photos for $10 but Katy ran into him at Nerd Church and said “I took the opportunity to get a free photo”. Later in the day she and Emma bought some ice cream (more on that later) and that same voice actor saw them and asked if the ice cream was good. Katy said “so we’re best friends now”. She was pretty excited.

While the girls were doing their nerd thing I went back to the Embassy Suites and took a nap! In the actual bed. I checked out a little before noon and arranged to store our bags behind the counter. A lot of people were doing that. I went over to the Waverly just as the girls were getting out of a panel and just in time to take them to lunch at Subway at the food court next door. Then I left them to their thing and went back to the Embassy Suites lobby where it was quiet to sit and wait. Heath was going to pick us up at 3.

On the way to lunch I saw this lady and asked if she crocheted her costume. She did and she has an etsy shop — crochetcosplay — where she does custom orders. “Not your grandmother’s crochet. 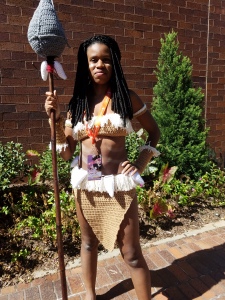 On the way out of lunch I saw Wirt from Over the Garden Hedge. Katy dressed up as him for trick or treating a couple of Halloweens ago and not one single person had any idea who she was. I mentioned to Katy I saw Wirt and she said “Oh, I’ve seen like 30 of them”. Well it was the only one I saw!

When Katy and Emma came back to the Embassy Suites at 3 they had a bag of Japanese junk food. Anime, if you didn’t know, is specifically Japanese animation so there are lots of Japanese products available. Pocky, anyone? 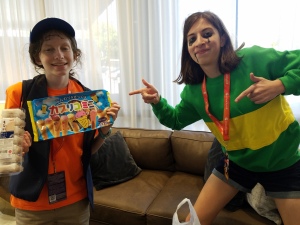 This is the ice cream that they got, it was soft-serve but already in the cup with a clear plastic lid over it and in a fridge ready to go. They said it was really good.

So unlike the soda at Chipotle the whole weekend was a winner.