It was pretty awesome. Katy skipped school along with about 90% of the students (it was excused) and she and Heath drove to Lavonia, Ga., which was in the path of totality. Heath started weeks or maybe months ago planning for this. He ordered nice plastic viewing glasses online and each pair came with two paper pair was well. So between the three of us we had nine pair. We could have been making some money! He didn’t want to go to Helen or Rabun, both in Georgia, as it seemed that was where “everyone” was going. Lavonia seemed to be a good choice that wouldn’t be as totally jam-packed.

I stayed at home, did a few things around the house and watched in the cul-de-sac.

They left about 9:15 this morning, traffic was already backing up and Heath said they drove about 20 mph the whole way except for the couple of times he put the car in park. They made it in plenty of time, though, and found a spot to park along a street in what Katy called “the science area” and Heath called “the nerd area”. Someone had a telescope and was reflecting the eclipse onto a white board. Katy said they saw some sun spots, too.

There was quite a bit activity. Katy said there were a few vendors, including 25-cent Popsicles and some art. Katy bought a thing with feet and a necklace made of pottery and glass. There was a high school band raising money for a trip to New York.

When the eclipse started they alternated between looking with the glasses, looking at the telescope and keeping track on an app Heath had installed. He was announcing the moon’s location as it crossed the US so people get kept asking him “where is it now”. The app also told them when it was safe to take off their glasses and look so they did that and saw it when it was at 100%. Katy said she saw the street lights come on. 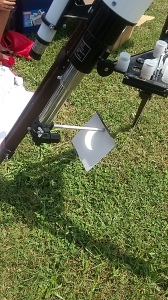 They made friends with a couple of families from Swanee, not terribly far from  us, and with the telescope guy. They stood under the hatchback of the Highlander and had peanut butter and jelly sandwiches, Sun Chips and Moon Pie Bites (the best I could do) for lunch.

They headed back about 3, figuring they didn’t need to watch it in reverse. Katy texted me to say it was nothing but brake lights but then they realized there had been a wreck and once they got past that, it was smooth sailing.

Meanwhile, in the cul-de-sac. I took my chair and glasses out about 2:20. My next-door neighbor Nora pulled up and she had made a pinhole viewer but didn’t have any glasses. I told her there were some paper glasses on my kitchen table if she wanted to get them. She got those and then got her son to come and watched. He watched for a couple of minutes and then went back in. Another neighbor, Jonathan, came out and watched with us and was able to get a photo. He got his mom and she came out and took a look. I didn’t ever see her but I heard her say “wow!”.

Jonathan was able to get a cellphone shot with one of the paper glasses over his camera. It was more impressive in real life.

Jonathan finally went inside but Nora and I were determined to stay out until the moon was completely across the sun. It took forever and got hot! We were at 98.2% totality and when the moon was almost completely over the sun it didn’t get dark but it was definitely not as light. No crickets and I didn’t hear anything out of the chickens. It was quite a bit cooler and actually really nice. Two neighborhood boys (Jonathan’s nephews) came home from school about 3:30 and I asked if they wanted to look. The fifth grader said “it’s over!” and I said “no, come look”. Nora gave him her glasses and he took a look. I put a pair on the third-grader who said “I don’t see anything”. Because he was pointed off to the side and looking directly at a tree. I got him looking in the right direction. So I’m glad we had those extra glasses.

We had clear weather but at one point some clouds went in front of the sun and you could see the shadows and it was really neat.

And in Metropolis, Ill., Superman was seen wearing eclipse glasses. 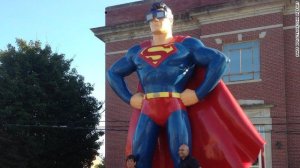