My college friend Michelle always said if she got married she was going to have the Hallelujah Chorus as her recessional because it would have been such a miracle. She finally got married. I won’t give away her age but she did manage to accomplish it before 50! And she had the Hallelujah Chorus but everyone was clapping at first and didn’t start laughing until a few seconds in. They got married at a WWII plane museum called Hangar 52 in Big Spring, Texas, and it made the news. I told Michelle they better look good because they were going to be in every brochure. Rodney is a pilot (although with an expired license right now) and an interest in WWII planes, so he picked the venue.

And I missed the wedding. She got married on July 15th the day we left for vacation and we were going to rearrange vacation until she mentioned a party on the 29th for everyone who couldn’t make the wedding. Not only was the date more convenient but we’d have more time to actually visit. And the party was in Abilene, where we went to college so I could visit there as well. So it all worked out.

I arrived in Abilene around 3:30 on Friday. Boy has the Abilene airport ever improved. There wasn’t much to it when I was flying in and out from 1987 to around 1995 when I gave up and started driving to the Midland airport from Sweetwater. They now have a jetway and baggage carousels. No sitting around on the tarmac with the door open and the 20-degree breeze blowing through.

One thing I wanted to do was go over to Hardin-Simmons and pick up a few things from the bookstore. They’re only open on weekdays and only until 5 so I headed right out there. I took a little detour when I got going the wrong way on the expressway and found myself over by Abilene Regional Hospital on the other side of town. However, with Texas’ 70-mile-an hour speed limit it didn’t take long to zip across town.

Got my shopping done, drove around campus a little bit and then went to find the hotel. I tried to round up some company for dinner on Friday night. Jennifer McLean, another college friend, and her husband were available. We met at Texas Roadhouse so I could have some chicken fried steak. The food was delicious and the company was wonderful.

I also was going to meet up with some of my adopted family from college. Back when I was in school the churches had a program for church families to adopt the college students attending the church. Monte and Sharon Pillion and their three children were my family. Sadly I only met Monte once before he died from cancer a few months later. I’ve stayed in touch with Sharon and the kids (well, the girls, anyway), all these years. So we really wanted to get together sometime on Saturday.

Saturday morning I wasn’t real sure what I was going to do with my time. I picked up a calendar of local events in the hotel lobby to see if anything was going on in town. For Saturday it said “Saturday Family Fun Day see July 1”. So I turned the page over to July first. Abilene has always tried to be a cultural kind of town and there are many museums and  outdoor art is real big. There is a museum that opened just after I left the area 21 years ago called the National Center for Children’s Illustrated Literature and they were having a special exhibit. So I decided to go check that out. I got downtown around 9:15 and nothing opened until 10, so I drove around and parked and walked around a little.

The Grace is an old hotel built in 1909 and now has three museums in it. The only museum I’ve been to is the hands-on children’s museum. I took my Brownie troop from Sweetater there one Saturday. Afterward we walked across the street to McLamore-Bass Soda Shop for ice cream and it’s gone out of business since then.

I walked by The Paramount Theatre. This is an old theater from the 30s and is now a non-profit organization. The auditorium is really nice. It seats 1,200 and the front has a castle facade and the ceiling has twinkling stars and clouds that float by. They do all kind of performances and events but their big thing is their classic movie series. When I was in school they had them twice a month but by my senior year they had cut back to once a month and started including more modern classics. I know they showed all three Star Wars movies my senior year. We saw all kinds of good movies there including Singing in the Rain, An Affair to Remember. Seven Brides for Seven Brothers (my friend Teresa Dorris’ very favorite movie) and a Marilyn Monroe double feature –Gentlemen Prefer Blondes and Bus Stop. The film director would give an introduction that lasted anywhere from five to 45 minutes depending on what he had to say. They  have him on a schedule now. He talks from 7-7:30 and the movie starts at 8. He also teaches history of American film at Abilene Christian University and is always very interesting. The August movie is The Adventures of Robin Hood with Errol Flynn and the September movie (on the other side of the marquee) is Steven Spielberg’s Close Encounters of the Third Kind.

And I mentioned outdoor art.

Lots of murals on buildings, too. 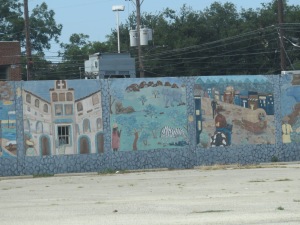 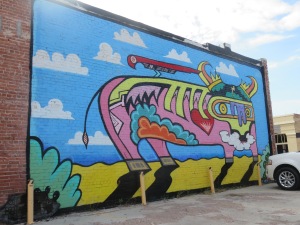 And this isn’t downtown but my Abilene friends who haven’t been there in a while will be glad to know the Herd of Cows is still standing although the calf has been stolen. Years ago the city had the original wooden Herd of Cows on temporary loan and the story is some airmen from Dyess would go out at night and re-arrange the cows into not-family-friendly positions so the city felt bad and commission a metal copy. They were cemented into the ground and someone tried to yank one out and it was twisted a little. Now it seems someone succeeded in getting one out. Those cows have had a rough time.

And finally it was 10 and things were opening. The special exhibit (I don’t think they have a permanent exhibit, I didn’t see anything else) was on Garth Williams’ art.

I didn’t recognize his name or realize who he was until I walked inside. He did the illustrations for all of the Little House on the Prairie books, Charlotte’s Web (his very first children’s book illustrating job), Stuart Little, A Cricket in Times Square and lots of Little Golden Books. I signed in at the front desk and they had a scavenger hunt paper to fill out answering questions based on the information in the exhibit. I did that and won a button with Wilbur on it. No photography allowed in the exhibit but they did have a nice book about the exhibit so I bought a copy of that.

I wanted to head back down to HSU and drove to the Civic Center where the road dead-ends. I turned left, completely missing the Storybook Gardens, which was to the right. Michelle told me about it later so I went back that evening. It’s a path to walk on with scenes from various children’s stories. Michelle said it’s popular for kids to sit in Stuart’s canoe and take photos. 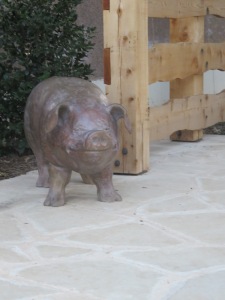 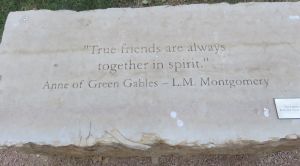 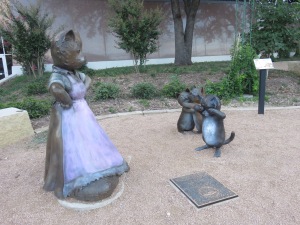 These photos were a little after 8 p.m., it wasn’t anywhere close to being dark and was quite a bit cooler. There were a few families out, too.

After I finished up downtown I headed down to HSU again to walk around some. I’ll put those photos at the end so non-HSU people don’t have to suffer through them. While I was there Sharon texted to suggest we meet at a place called Lucy’s for lunch. It was mostly hamburgers and hotdogs and very good. They had a lot of neat decor around the place. Sharon brought her daughters, Rebekah and Meredith, and her granddaughter, Avery, who is her son Jason’s oldest. So it was a nice ladies lunch.

The party started at three but I got there a little after two to visit and help out a little. The party was hosted by Michelle’s lifelong friend Bobbidee. Their parents were friends as students at HSU. Bobbidee’s house was very nice with lots of things to look at her. Her maiden name is Duck so she had lots of duck things. She sews and showed me her sewing room, just packed full of stuff. Her walls were covered in patterns and at first I thought it was wallpaper then looked closer and realized it was actual sewing patterns decoupaged on. Michelle had obviously been telling Bobbidee about Katy. She said she wanted to send Katy something to encourage her in her sewing but decided she didn’t have anything on hand.

There was a good turn-out for the party, about 30 people came. Bobbiedee had lots of good food.

Jennifer McLean, half of my dinner date from Friday night, came. And Britt Yates Jones who attended HSU the same time as us a music grad student, I believe was there. She is working for HSU now. She was the alumni relations director for years and two months ago was put in a newly created position planning alumni events. So it was fun seeing her, too.

The party officially wrapped up around 5 but I stayed until nearly 8 along with Michelle and Rodney and Bobbidee’s daughter, son-in-law and granddaughter. It was a great time visiting. I told Rodney he needed to get Michelle to Atlanta. In the 17 years I’ve lived here she hasn’t made it at all and I managed to go see her twice! I told her to tell Rodney if he doesn’t get his plane registered or whatever he has to do with it and get his license renewed by next summer, she’s buying a ticket and coming anyway!

So it was great weekend with great friends and lots of fun.

For you HSU people. I drove down Hickory a couple of times and noticed that the car with the weeds growing out from under the flat tires is gone. I’m sure no one but me remembers that.

Here are a few photos.

They re-jiggered the dorm situation about three years ago. They wanted to put freshmen men and women on the same side of campus to facilitate friendships. (I guess with Ferguson being a women’s dorm for so long they realized men and women living on the same side of campus doesn’t lead to pregnancy.) So Anderson is now freshmen women and the upperclassman men moved into Behrens. Mrs. Culpepper is probably turning over in her grave. And Ferguson is back to men, again. Britt said it took a year — or maybe two — to get the locker-room smell out of Anderson. And they’ve bought several houses and I think put in some apartments. For a few years it was really easy for undergrads to live in campus-owned houses and apartments. Birtt said now they’re back to having everyone live in the dorms.

It’s hard to see since I was taking a picture of a window but cafeteria dining hours have changed. I remembered reading that they decided to go to all-day service on weekdays. What surprised me was Sunday dinner (5:30-7, it’s hard to read). I guess there was enough demand for it. I remember when they scrapped Saturday morning breakfast and went to brunch, although they opened earlier. The cafeteria manager came to our dorm meeting and said on Saturdays they served breakfast to about 10 people on family weekend and that was about it.