Friday I didn’t have much on the agenda. A Capitol tour was one thing I could reserve myself so I got us tickets for 10:40 a.m. (after I found out when our White House time was) so we could have a little more leisurely morning. Especially after the day before turned out to be a 14-hour marathon. The tickets said to get there 45 minutes early in the summer to go through security. We got there about 10 and security took five minutes. We went to the desk in the visitors’ center to redeem our passes and she asked if wanted to get on an earlier tour, so we went at 10:20. We watched a short film about the history of the Capitol and then took a guided tour.

There were lots of people there. They have several guides to take smaller groups plus some senators and representatives set up their own tours. Our senators’ staffers had done that for us but neither was at a convenient time for us so we did the public tour. I’m glad we did because our guide had been there for years and years and I’m sure knew much more than the senatorial and representatives interns (or whoever) who do those tours.

The building was designed by a British architect who wanted to do things in the traditional way. In England heads of state and other VIPs were buried in the state buildings. So he built a crypt for George Washington. Washington was still alive and kicking and he came unglued. He said this is not a monarchy, I’m not a king and I don’t want to be treated like one. Right then he was sure to put in his will that he was to be buried at Mount Vernon, his farm. And he was. And still is.

We went upstairs to the rotunda next. Lots of beautiful art and carvings.

Next we went to Statuary Hall. This was really neat. Each state was allowed to donate two statues of people from their state who made some kind of contribution. Then some were donated and some were commissioned and DC gifted a statue. I don’t remember which two people Georgia picked but later Congress commissioned a statue of MLK Jr to go in so Georgia has three. Our guide asked people where they were from and she knew off the top of her head which two statues were from their state and what the person was noted for. One lady was from Florida and of that state’s statues was the man who invented air conditioning (clap, clap, clap). He was a doctor and had malaria patients who needed to be in a cool environment so he invented the ice maker and air conditioning trying to keep them cool and didn’t take out patents on either.

By the way, not all of the statues are in the hall because they were afraid the floor would collapse. Not to mention you wouldn’t be able to walk around. They are placed throughout the building, including a few in the crypt. At least it’s getting some use!

There’s one really neat thing about this room and that’s the “whisper spot”. Our guide has us all huddle in one spot, she walked several feet away and whispered something and we could hear it clear as day. It was kind of weird. Well, when I was a kid I loved the Judy Bolton mysteries and I’ve bought nearly all of the 36 books for Katy and she likes them, too. There is one mystery called The Whispered Watchword and it’s about that very phenomenon. Judy is taking a tour of the Capitol and she hears what sound like a very loud conversation but it was actually two men whispering across the room and of course she has to solve the mystery of what they were talking about. The whisper effect didn’t happen when the hall was actually in use by Congress in the 1800s because the furniture, drapes and carpet absorbed the sound. It wasn’t discovered until later.

After our guided tour was finished we went through the museum and learned all about how the Capitol and the city grew over the years. They had models showing the different stages over the year. There were many artifacts that were interesting to look at. No photography allowed, though.

There is a tunnel from the Capitol to the Library of Congress so you can go from one to the other without having to go through security in each building. So we went over to check that out. 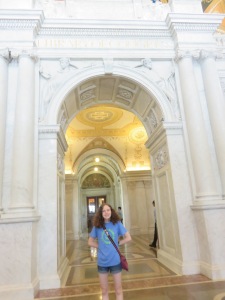 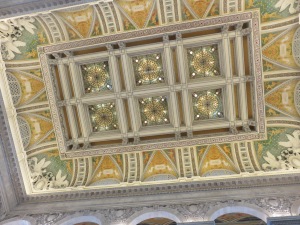 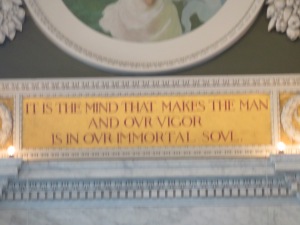 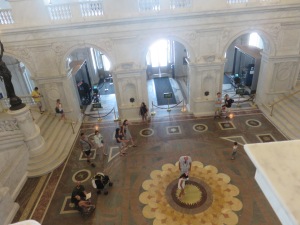 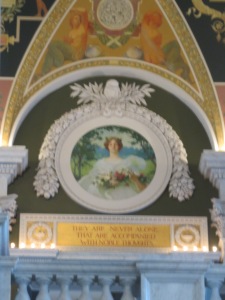 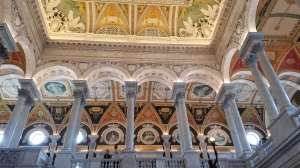 The library is beautiful and if you get a chance to go I recommend it. They do tours every 30 minutes or hour or so but we didn’t do one. They have a Gutenberg Bible that we just got a glimpse of as there was a tour group crowded around it.

By the time we finished up there were ready for lunch and had to hike to find a place. I didn’t have anything scheduled for the afternoon thinking we would just see what sounded interesting. I had wanted to go to the Newseum but wasn’t real sure as it’s kind of pricey. Well, I guess it’s not for a museum, but when everything else is free. Then some friends recommended it. I’m really glad we went.

We passed by the Air and Space Museum and Katy wanted to go and see if they had some sunglasses. She lost track of hers in the car somewhere and her eyes are so sensitive to light. She thought she might find a pair of neat space-themed glasses. I waited outside with our bags so they could go through the no-bag security line. After about 20 minutes I thought “they are in there looking at every toy and every t-shirt” and sure enough they came out with a bag full of stuff. And just plain sunglasses. And then we were off again.

The Canadian Embassy is right next door to the Newseum and some Canadian was out front and said the portico had a really neat echo so Heath and Katy went to try that out. He also pointed out where you are legally in Canadian territory (where the brick changes). 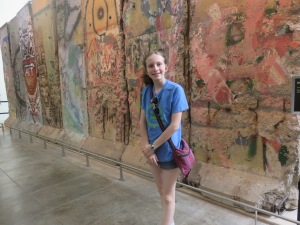 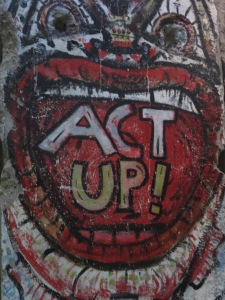 Section of the Berlin Wall 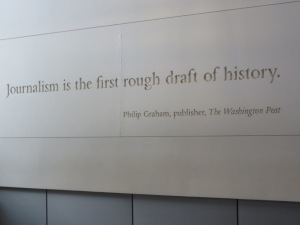 There was a small display of the First Amendment and students and Katy found it very interesting. 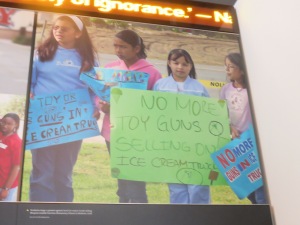 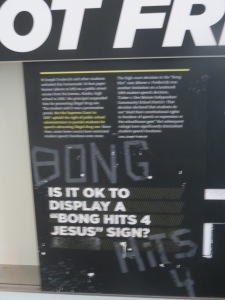 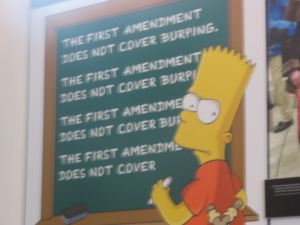 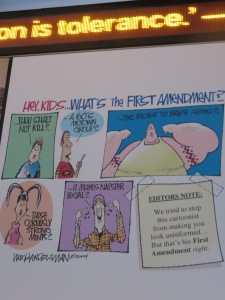 There was a world map that showed what level of freedom of the press each country has and we found that really interesting. Green is free, yellow party free and red not free. Singapore is a little red triangle pointing to where the island would be if putting a tiny dot there wouldn’t throw off the scale. 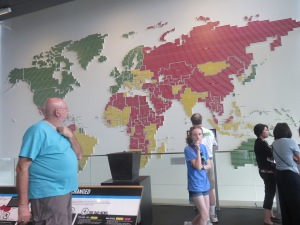 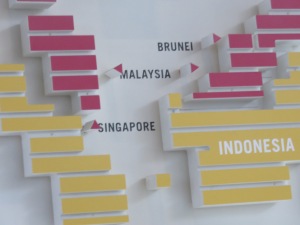 I loved my reporting days, even in a small town. 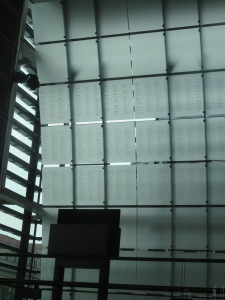 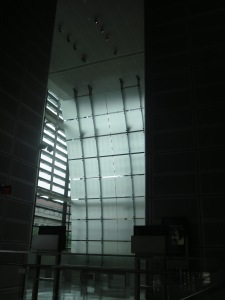 There were a lot of interesting exhibits. There was one on music and how it impacts politics, student and the Civil Rights movement along with a more general civil rights area, an FBI display that we didn’t have time for but is supposed to be really good and some interactive things. Heath and Katy did something on ethics (should you print this or not) and a virtual reality area and an area you can do your own news broadcast. We didn’t have time for either of those, though. This isn’t all-day museum but we could have used more than two hours.

And we loved the gift shop. I came out with a book about the museum and a t-shirt that says “The First Amendment doesn’t give you the right to be stupid” or something to that effect. 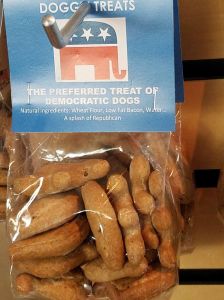 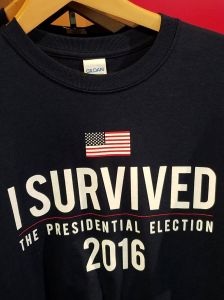 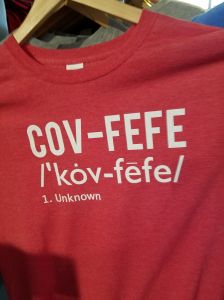 Katy really wanted the “Covfefe” t-shirt but they only had one and it was an XXL. Heath said he doesn’t think he survived the election. And Buddy didn’t get any dog biscuits, either.

So that was the end of that day. We went to a Thai restaurant near the hotel for dinner. Katy had found an ice cream place near the hotel but naturally in the opposite direction of the restaurant and I had told her you’re supposed to have ice cream on vacation, it’s a law or something. So we went there for dessert. It was a place that made ice cream on the spot with liquid nitrogen and was really neat. The ice cream was really good, too. Heath had vanilla basil, which is kind of different. We were really in a nice area of town, especially for restaurants of all ethnicities and varieties. The Thai restaurant was in the courthouse square and Nicecream was in the other direction in upscale  live/work/play area. It was Friday night so there were lots of young adults out and about. 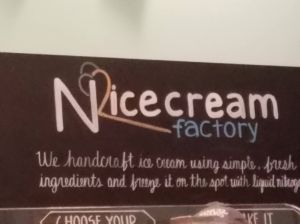 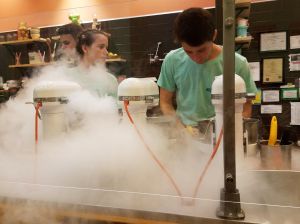 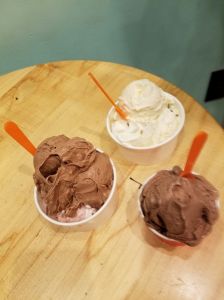