It was a warm Southern Christmas.

Christmas Eve was pretty easy. I did some last-minute baking and we had to make a quick run to the grocery store. That was a crazy scene. Katy wanted to make a cinnamon butterscotch pie so I helped her with that. This is a thing from Undertale, the video game she likes to play. She spent a week looking for recipes because some of them called for six eggs in one and nine in another and that was just too much. So she found a less egg-centric recipe. It turned out good. Very cinnamony, I’ve never known a recipe that called for two tablespoons of cinnamon.

Our church has two Christmas Eve services, at 3 and 5, and we always go to the 3 p.m. I like not having to rush dinner. With Christmas Eve on a Saturday this year the 3 p.m. service was a little more crowded than usual. Also there was some kind of a time warp.

After church I tried to get the annual photo of Katy and Buddy. As usual it took a few tries. He sees the camera and just goes nuts.

We had our traditional tamales for dinner and Katy’s pie for dessert. No photo of that.

We were all up by 8:30 on Christmas morning. We had breakfast, Katy went through her stocking and then ran to the neighbors to let the chickens out in their run for the day.

Sometimes the kringle makes it in one piece.

And sometimes it doesn’t.

After breakfast we opened presents and went to church.

She also got a Hufflepuff bathrobe. The hood is a little big. 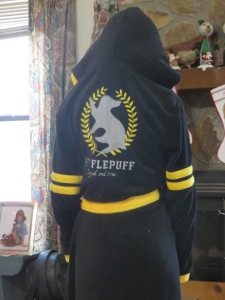 I gave him a suet feeder with a squirrel-shaped suet in it. He just needs to find a place to hang it. 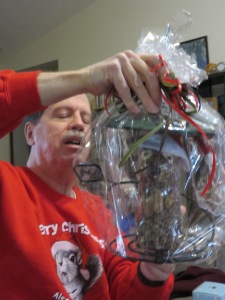 These were my two favorite presents.

Church was back in 2016. It was a nice service with a pretty good crowd. In 2011 it rained so hardly anyone was there that year. Katy enjoyed visiting with a few of her friends after the service. And we weren’t the only ones getting our picture in front of one of the trees.

After lunch Katy wanted to hang up her Eno and give it a try. She was out there for quite awhile although she did run in for her earbuds. She finally came in when she thought it looked like rain. Enos are very big at camp and a lot of the girls had them last summer. The come in two sizes, single nest and double nest. I went to REI planning to buy the single nest and the salesman was trying to talk me into the double nest and a lady walked up and said to get the double because she got her girls the single and ended up going back for the double. I turned to the salesman and said “You put her up to this, didn’t you?” So Katy got the double.

She wanted to show me how you can flip over in it, although I had to give her a push to get her going.

We continued our tradition of a cold dinner. I’m sticking with that, it’s just so much easier to deal with. We had ham, cranberries, broccoli salad, pasta salad and homemade rolls. We also had homemade butter since we only needed half the container of cream for the pie. We had dessert later and that was more pie, cookies and other goodies my sister-inl-law sent. Yummy.

We had an interesting time with the crackers. My toy landed where Heath’s water glass was about two seconds after he picked it up. Katy’s toy landed in the broccoli salad.

After dinner we went to look at lights. There’s one subdivision that always has a lot of really neat lights and was written up in the paper one year. The city also had a nice display. We live in an area with a lot of upscale subdivisions that really limit what you can do with your house so they often have just white lights or other minimal (read: disappointing) displays.

I love Santa’s laundry. I could do this.

It took me a minute to get the joke here. The Walking Dead is filmed in Atlanta. 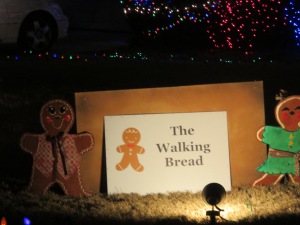 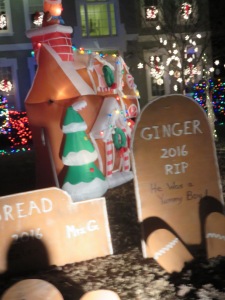 These are from the city’s display. We couldn’t stop so some of the photos are fuzzy from moving.

And Christmas is all over for another year. Except for the cleaning up. And I’m going to tackle the giant crossword again.

Oh, and one last thing. I had to laugh at this comic this morning. When I was growing up it was my dad who woke everyone up at 5 a.m.