Well, I picked up a new skill this weekend. A neighbor has a face-painting business and she’s asked me several times to work events when she’s needed an extra hand. I’ve never been available but when she asked Thursday if I could do an event Friday night I said sure. I asked her if this was fool-proof because I am not an artist and didn’t want some poor little kid to end up with a disappointing blob on his or her face. She assured me it was fool-proof so I headed over to her house on Friday afternoon for some training. She uses air brush and stencils and having been in middle school when stencils were all the rage I was pretty good at the concept of a stencil. She was right, it wasn’t too hard, just a matter of knowing how much pressure to put on the air gun you didn’t end up paint running everywhere. After about an hour I had a couple of the stencils down really well. The event was a holiday festival and tree lighting at the one of the branches of Northside Hospital. She ended up with way more artists than she needed so I had plenty of time to take it slowly. I couldn’t believe how sore I was the next day. I only worked for two hours and Susan will do events that are 10 hours a day for three days! I guess you build up some back muscles, it’s a lot of bending over.

This is an angel I did on Katy for practice. Getting the stencil in the right place was kind of tricky.

I got to be an expert on snowflakes and this was one of my better results.

This is pretty much the end of face-painting season until the spring festivals start up in March so between now and then Katy is going to learn all about it and do some next year. She needs to make some money and this would be perfect. She spent most of Friday night watching my friend and learning the process and getting some hints, she just needs to practice the actual painting.

Saturday morning was our city’s annual Founder’s Day parade, which is primarily a Christmas parade. Johns Creek is 10 years old this year. The weather was really nice for a parade, we usually freeze and one year it was rained out, but there wasn’t as much of a crowd. Never mind, more candy for the rest of us!

I noticed not only were there several Girl Scout entries there were more Girl Scouts than Boy Scouts! And one of the Girl Scout floats won first prize for their category, but I’ve forgotten which float and which category! The parade organizers could stand to have some banners for each of the winners.

I really liked this float, focusing on the future. The girls are holding signs with what they hope to be in the future.

And then there’s the other thing Girl Scouts are known for!

Medlock Bridge Subdivision wins for best HOA float every year they enter, which I think has been every year we’ve had a parade. They had a pirate them this year.

And it wouldn’t be Christmas without a few gingerbread houses.

Billboards are a big topic of debate around here, they probably are everywhere. I don’t mind the regular ones so bad but we have a couple of those electronic ones — always near busy, accident-prone intersection– and I think they are such a distraction. This group is trying to do away with them and Heath got a great photo of their float with a billboard in the background!

I tried to get Elsa, Anna and Spiderman all in the same photo but Spiderman stopped to give a few high fives and got behind so this is the best I could do.

I love the Feed and Seed band, they’re always fun to watch and listen to. 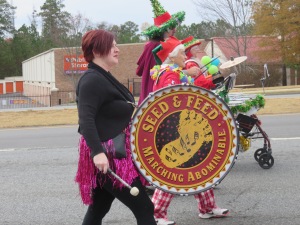 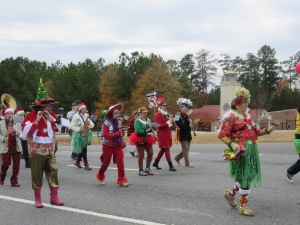 And we have hover-boarding broccoli. Why not? 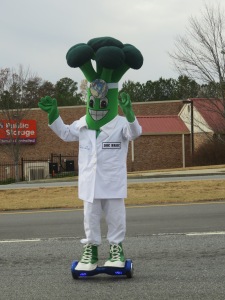 Parades around here are known for the stuff they throw out (you might remember the eight pounds of candy from the Old Soldiers’ Day Parade in August). This Frisbee says “Expect the Unexpected” and Katy did not expect to have it thrown at her! It was from the Army Corps of Engineers about water safety and life jackets. 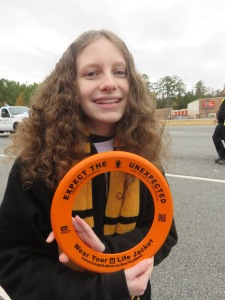 And you know it’s over with when you see Santa hitching a ride on the fire truck. 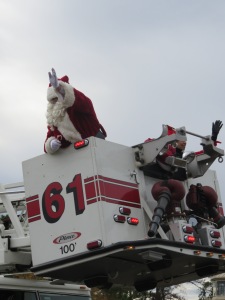 The rain held off just in time for Katy to go outdoor ice skating with the Girl Scouts. They just skated in the rain and had a great time. Katy said it was “liquid disappointment” since it was rain and not snow! 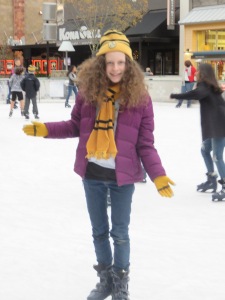 So it was a busy Friday and Saturday and then a rainy Sunday. We do need the rain, though.