One thing I wanted to do was go to Canaveral National Seashore, which is part of the National Park Service and the beach on Merritt Island. This is a map of Merritt Island. The purple on the far right is Cape Canaveral and the big purple section in the middle is Kennedy Space Center. The green along the beach is Canaveral National Seashore and the big green section inland is Merritt National Wildlife Refuge, which is part of the National Fish and Wildlife Federation. 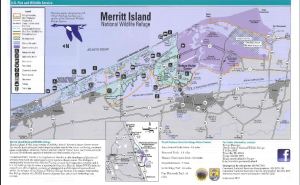 We stopped at the Merritt Island WR visitors center to get a map and find out where to go and what to see. She showed us a driving nature loop and the best place to see manatees.

We saw lots of birds on the driving loop. 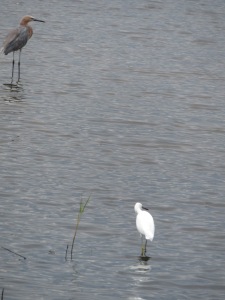 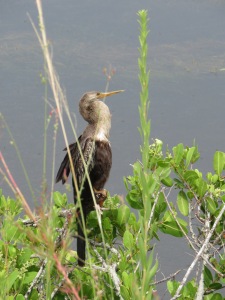 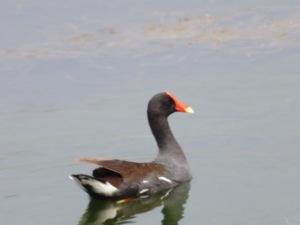 There is an observation deck for watching manatees but the lady at the visitors’ center said to go to the boat dock across the street. Boy did we hit the jackpot there! They swam right under  the pier and a couple were close enough to touch, although we didn’t! Manatee don’t jump out of the water like dolphins do, they just swim near the top and poke out now and then. There was more than just swimming going on, though. The lady at the visitors’ center said “It’s summer and spring is in the air”. 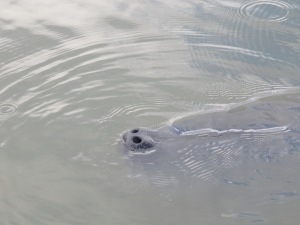 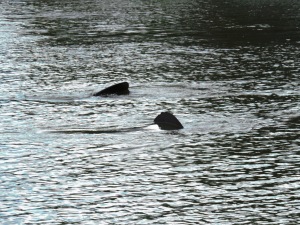 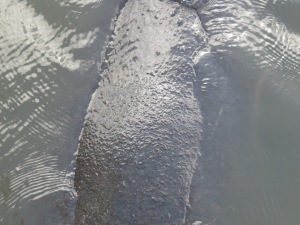 Heath got some video.

After that we drove down to Playalinda Beach, which is the very southern end of the national seashore. That end is actually owned by NASA but maintained by the NPS. We found out NASA has lots of biologists working down there. 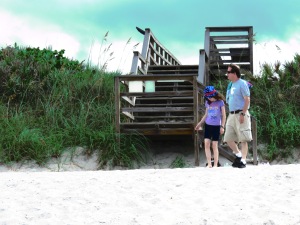 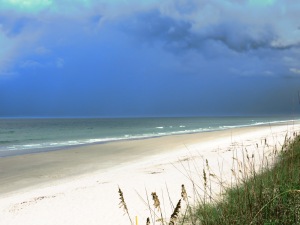 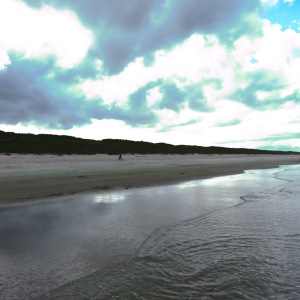 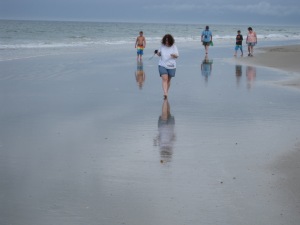 The beach closes at 6, we got there at 5:05 and they ran us off at 5:30. After a quick dinner in town we came back to the Merritt Island visitors’ center for the main event. Lee booked us into a turtle watch offered by the NPS. It started at 8 and the park ranger gave us a talk on sea turtles while two volunteers scouted the beach for a nest. They reported back about 9 that they had found one so we all drove to the two or three miles to the beach. We walked past a sea turtle that was swimming ashore but we spooked her and she turned around and went back. We got to “our” nest and the turtle had dug the hole and was laying eggs. She was facing away from the water (that’s how they do it) and the kids laid down on the sand behind the nest and had their noses in it. The rest of us stood behind and watched. Sea turtles lay 100-150 eggs. They are somewhat squishy, about like a ping pong ball, so they don’t crack when the hit the ground or each other. So we watched her lay her eggs, cover them really really well with sand, climb out of the hole, make a u-turn and head back to the ocean. Then the ranger marked the nest with the date and a name (Katy picked Star) and the number — 3,271. That’s a lot of nests and the season isn’t over yet. No pictures as light bothers the turtles, the ranger shone a red flashlight on the nest so we could see. It takes 45-60 days for the eggs to hatch and the baby turtles that make it will swim out to the ocean. It takes 20 years for a sea turtle to mature and then turtles live practically forever.

Like I said, no photography but I did find these photos for examples.

So that was the most exciting part of the day.