Wednesday morning there was an Air Force launch of a satellite scheduled for around 11:30 at Cape Canaveral and the beach in front of our hotel is a great place to see launches so we hung around the beach that morning. I’d like to post a spectacular photo of the launch but we didn’t get one. Heath did get video, though. He can’t see it on the screen so he’s doing a lot of jiggling around. It’s the bright flash over to the left.

Someone on the beach with us said it looked like a bottle-rocket going off. It wasn’t all that exciting but we’ve all seen a launch now. There was a family from Ireland staying there and they’ve been to several launches, including a night launch of the shuttle Endeavour, and the wife said this one was kind of disappointing but chalked it up to a “first-world problem”. A launch not being up to your standards certainly qualifies as a first-world problem!

While we were hanging around in the morning I took Katy out for a beach photo shoot and got some nice shots. 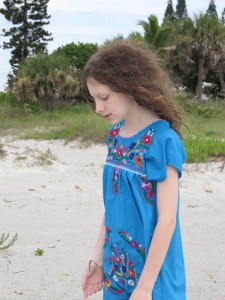 Lee booked us on a boat tour of the Banana River that afternoon that was really fun. I didn’t get a picture of the boat but it was a 20-passenger thing with high rails around it so you could get up and walk around. We saw two dolphins, lots of manatees and lots of birds. And lots of nice houses right on the river that I would love to live in!

For dinner Chip grilled hamburgers and we ate out by the pool. After dinner, Heath and Katy went out to fly the kite Heath got for Father’s Day. Once nice thing about this stretch of beach is all of the hotels and resorts are small and between that and July not being peak season we had loads of room on the beach. 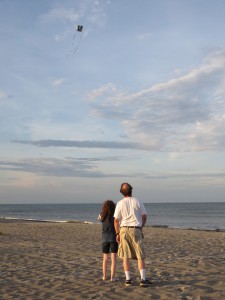 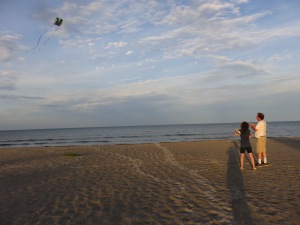 After dark the boys wanted to go to the beach and catch some crabs for fishing bait so we went along. Katy just collected shells. I was surprised she wouldn’t touch a crab, she’s not usually the squeamish type.