We went to the Fernbank Museum of Natural History Wednesday.

Katy and Heath checking out the t-rex in the entryway. When I put the camera on a wider shot I got all but the tip of his tail.

Katy is slowly catching up with his foot!

Currently the  museum is having an exhibit of Extreme Mammals so we headed there first.

On one end of the scale we have the smallest mammal, the Batodonoides.   It’s hard to tell in the photo but it’s about the size of a pencil topper.

This is a little easier to see. The Indricotherium is 15-feet tall and related to the rhinoceros .

I wondered if they give birth standing up like elephants do because that is a heck of a drop. A foot taller and would have been too tall for the room!

This is a Macrauchenia. I thought it looked like something out of Dr. Suess. That’s a funky little trunk.

The narwhal had a 2o-foot tusk. Scientists don’t really know what the tusk was for except maybe to attract a mate. I can think of a lot of uses for a 20-foot tusk. Speed it up kids *poke poke* It would certainly part the crowd for you. Katy knew what a narwhal was, too. I’d never heard of it. They didn’t have any kind of skeleton of the whole animal (it’s like a whale) but here’s his very impressive tusk. It’s a spiral. It was also flexible and could bend down a foot.

Katy tried a turtle shell on for size.

We learned that humans are extreme mammals because our brains are disproportionately large for our body size. It was pointed out that there is no correlation between brain size and intelligence.

There are several areas of the museum. We saw more dinosaurs (I found it interesting that the models with skin were not anatomically correct), a history of Georgia with lots of archeological discoveries, a section on the coast and barrier islands. After going to Jekyll Island Katy was really interested in that.

A room devoted humans showed how we identify ourselves through groups (various types of uniforms), religion, ornamentation (jewelry, tattoos, etc.). There was a hands-on area devoted to the senses so lots of things involving vision, hearing and touch.

Katy’s main reason for wanting to go was the Nature Quest (http://fernbankmuseum.org/explore-exhibits/permanent-exhibitions/fernbank-naturequest/). This area opened a few years ago and is for children through age 12. We figured we better get there before Katy outgrows it! It’s all hands-on activities for kids to learn about nature. 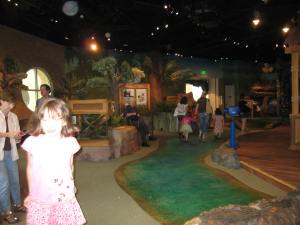 The little river on the right had virtual fish that swam around and you could try to catch.