Katy is adding to her collection of autographed astronaut photos. She’s now up to two!

NASA has a traveling exhibit called Destination Station and it is at the Fernbank Science Center.  Along with the exhibit they had an astronaut visit, sign autographs and give a presentation. It was a little late on a school night but we decided to throw bedtime to the wind and take Katy. The exhibit was a lot of photos and some videos and a few items used in space. A big item that’s part of their permanent collection, though, was the Apollo 6 capsule. Heath said he didn’t remember ever hearing about the mission. Then he discovered it launched the day Dr. King was assassinated. I said “well that’s why, it got knocked right off the six o’clock news”. It was also an unmanned mission so probably not a whole lot to report.

This is the capsule.

Katy loves the “zombie” look when you sleep in micro-gravity. Your arms just naturally float out in front. 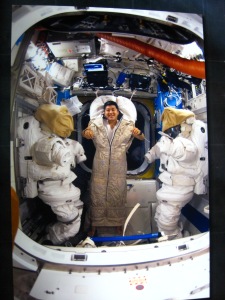 The International Space Station is the length of a football field.

Where is it now? Somewhere just off the US east coast in this photo. You can see this on http://www.nasa.gov, too.

The astronaut who spoke was Tracy Caldwell Dyson. She’s been on the ISS twice, once for two weeks and once for four months. She signed autographs prior to the presentation.

You can see how excited Katy is. She was all smiles. 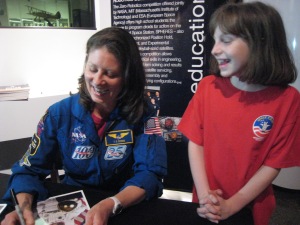 After she got her autograph a women with NASA asked me if it was OK if Katy was interviewed on tape. Well, OK. They are interviewing people for promotional material for the exhibit. Actually, she wanted to interview us both but I said she could talk to Katy. Didn’t occur to me to turn my camera to video to tape it.

I don’t remember what all Katy was asked. What was her favorite part of the exhibit and would she ever like to go into space. Well, since all we ever hear at home is “Mars, Mars, Mars” Katy had something to say about that. Actually, before the interview started I told the lady Katy wanted to work for NASA, had been to Space Camp and wants to be an astronaut. The interviewer said she wasn’t sure if the video would be used but that Katy was the best person they’d interviewed so far! If they use it will be on the NASA website. The exhibit will be going to Seattle in June so they might use it saying “Destination Station is coming to Seattle, see what people in Atlanta are saying”. Something like that. She said to keep an eye out for it over the next couple of months.

So following all of that, it was time for the presentation. Dyson said she applied several times to be an astronaut and when she finally got the call she was working at the University of California, Davis. When she got the news, she ran down the halls hollering “I’m going to be an astronaut”. Then they called back and said “we haven’t released all the names yet, so you can tell your immediate family but no one else”. When she was completely silent on the phone the NASA person said “It’s too late, isn’t it?” I figure her mother would have told everyone whether she was supposed to or not, anyway.

So she had a video of her time on the space station. It was interesting because for her four-month-sting she went up in a NASA shuttle but came down in a Russian Soyuz capsule. She said the shuttle is a very smooth re-entry and landing because it’s a glider. The Soyuz is much bumpier and you can feel the heat as the outside layer burns off. She said they are so well trained they aren’t really frightened of anything but that was pretty scary. They landed in Kazakhstan and when you do that you get some kind of a doll made of you. Like a Russian nesting doll except only one.

I swiped this photo from somewhere online. 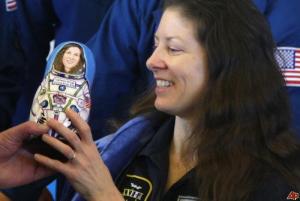 It was a very interesting evening. They had a planetarium show afterward but we needed to get home and get Katy into bed. Maybe another time. This is a pretty neat little museum. It’s not very big, you can see it all in about an hour. It’s owned by the DeKalb County School District and nearly closed down last year but they managed to save it. Fernbank Elementary School is right across the parking lot and Katy thought it would be pretty neat to go to school right across from a science museum like that.