Well, today was the big day. We got Katy to Space Camp in Huntsville. We left a little before 11 and had a pretty uneventful drive. We drove past a sock outlet and the Unclaimed Baggage Place. I’d like to stop at both of those places on Thursday when we head up to get her. We also went by a big museum for the band Alabama. I think we’ll skip that.

It took about an hour to get her all squared away. We got her wristband that tells her room and team. I’ve forgotten the name of the room but she’s on the Aldrin Team. She was really embarrassed that she couldn’t remember who Buzz Aldrin was. Then we picked up linens, swung by sick bay to meet the nurse and drop off her medicine and warn the nurse of an impending lost tooth. The nurse said they have a process for dealing with lost teeth. Then we went to her room in the habitat. That was kind of weird. None of the bunks were assigned and there were no crew trainers around so she picked a bunk, we made up her bed and organized her locker and headed back to the check-in area at Habitat One. Her scholarship came with a free flight suit. I didn’t pre-order anything because I didn’t have a clue what size (and would have guessed wrong) and I didn’t get a coupon code for it and didn’t want to have my credit card charged for it. So we get to that area and turns out that Katy is not on the list for a scholarship flight suit. So the trainer had to get the store manager to look it up on the computer and make sure she had the information. She did but she didn’t have it earlier so Katy had no name badge either.

Considering those scholarship notifications went out March 12 I think that could have been handled a little more efficiently. I mean, it’s not rocket science! The patches are embossed on leather and they make them onsite so hopefully she’ll get it tomorrow. They have to put it on upside down. I never found out what you do to turn it over. We got that straightened out and it was back to  Habitat 2 and her room where she met a couple of girls who were together. Their big brothers had both been to camp before so their moms knew the drill and I found out they don’t assign buddies. Still no sign of any crew trainers. So back to Hab. 1 as it was nearly time for orientation. We milled around for about 10 minutes and then they said “say goodbye to your kids now”. The kids all went off and the parents had a short orientation, mostly about behavior expectations (they expect noise), phone calls and home sickness. Then we were on our way.

Her sleeves and legs are rolled up as we got it a little big so it’ll last a while. At minimum it needs to last until Halloween!

This is Habitat 1, the neat-looking dorm and also includes the gift shop and other stuff.

This is Habitat 2 where Katy will be living. It was big room but looked to only be about 1/4 full. Since the girls picked their beds, they’re scattered everywhere. It’s not just one long room, there are corners and they are kind of in groups of fours. Katy was in a little alcove by herself. I imagine Monday night there will be some bed shuffling going on as the girls make friends. And we never did meet her crew trainers.

Driving back was a little more interesting. We stopped at Wendy’s for dinner and then started driving. Next thing we knew, we saw this. 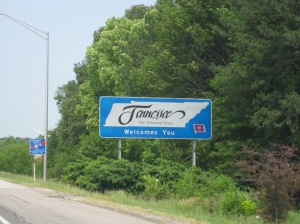 Oops. We hadn’t planned to go to Tennessee and didn’t want to because we wanted to avoid the interstate. Taking the state roads was much more relaxed. The last time we went to Huntsville we came back through Tennessee. Heath has until the end of the week to figure out where he’s going wrong. Graduation is Friday at 9 a.m. and we’ll go up Thursday and spend the night.

We’re back home now. With Katy at camp and both dogs at a friend’s house, it is really quiet around here. But the dogs are coming home tomorrow.