For her 10th birthday Katy decided she wanted to go to Medieval Times so we went Saturday night. She invited a neighborhood friend, Sophia, to go along with her. It started at 5 but they told us to be there at 4. That would be so you can wander around and spend even more money than you already have. So we got sucked into the Tiara Package so Katy could be officially knighted.

They had several people being knighted. One was this guy who had just gotten a promotion and had no idea his companions had arranged it. They dragged him in from the bar and he was pretty embarrassed but went along with it.

Katy’s package came with a photo and tiara, so we bought Sophia a tiara also so they could both be princesses.

Then we all filed into the banquet hall for dinner.

Dinner was good. We had tomato soup, roast dragon (tastes just like chicken), a spare rib, roasted potato and apple turnover for dessert. You were seated in a section according to which knight you were cheering for. There were six I think and ours was the black and white knight. I never did get a really decent picture of him and his horse. 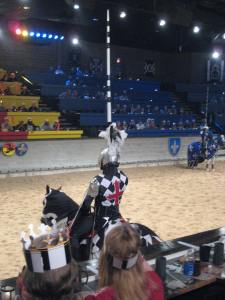 I noticed during the jousting the horses weren’t just real loyal. As soon as a knight fell off, his horse took off for parts unknown!

Our knight was throwing flowers to the ladies and Sophia caught one! The photo didn’t come out too well, but she was very excited.

During dinner some Andalusian horses performed and they were just beautiful. 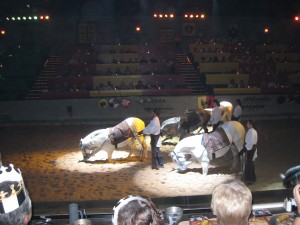 I didn’t really follow the whole story but our knight didn’t win the jousting tournament. It was a fun evening and Katy says it was the best birthday ever.